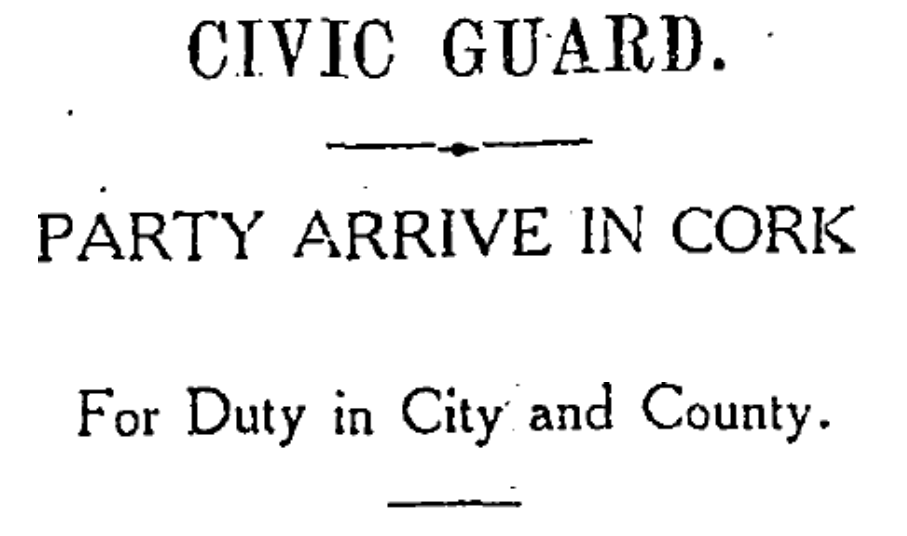 ‘A party of ­­the Civic Guard, numbering about sixty men, arrived in Cork yesterday from Dublin to take up their police duties in the city and the county. They are at present stationed in the School of Music, and their numbers will be strengthened in a day or two by the arrival of a further contingent.

It is intended to send some of the members of this party to Midleton, Youghal, Clonakilty, Bandon, and later on, others will be drafted into the remaining towns of the county. The numbers of the force who arrived yesterday morning, are remaining at the School of Music until their departure for the country districts which will probably take place today. About 20 or 30 are to take up duty in the city, and these in a few days will take over a building in the city.

The arrival of the Civic Guard, it may here be mentioned, is welcomed greatly by the citizens. Our special reporter at Dublin wired last night:- Another contingent of the Civic Guard proceed to Cork by the Lady Carlow [passenger ship owned by the British and Irish Steam Packet Company] this evening.’

M.D. Daly and Sons was a distiller and off-licence company based at Academy Street. D.J. Daley was an Honorary Secretary, along with three others including the Lord Mayor of Cork of the Cork Charitable Coal Fund which took subscriptions from a number of individuals and businesses in order to assist the poor during the winter months. The company also subscribed to the membership of the Cork Industrial Development Association which exhibited at the 1922 Cork Summer Show ‘to be held under the auspices of the Munster Agricultural Society’.