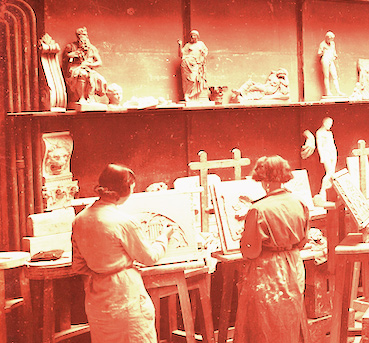 Crawford Art Gallery is delighted to announce that, following careful consideration of all the submissions, its judging panel has chosen to fund six BUILDING AS WITNESS Project Awards.

BUILDING AS WITNESS focuses on the site of Crawford Art Gallery (previously Crawford Municipal School of Art) which was witness to fascinating histories of local, national, and international importance surrounding the Irish Civil War period.

The Gallery team is excited to work with the selected artists as they develop the following projects in 2023 and 2024.

Ursula Burke
An exploration of the indelible imprint that the Burning of Cork left on its people, buildings, and psychology through the creation of a tapestry frieze and corresponding sculpture.

Linda Curtin & David Keating
Using dramatic reconstruction, tableau vivant, and a cast of actors, visitors will be placed at the centre of a short theatre experience in virtual reality that positions Seán Keating’s painting Men of the South in its own time.

Fiona Linnane
The creation of a 30-minute musical work responding to the building, its architecture, and history, in collaboration with the youth ensembles of Cork ETB School of Music and documented through video and photography.

Jan McCullough
A new sculptural intervention and photo work that initiates a public dialogue about the building and its embodiment of caretaking, past and present, accompanied by a tailored public programme for visitors and participants.

Brian Teeling & Jennie Taylor
Served by in-depth archival research and psycho-geographical fieldwork, this project will produce an audio-tour and a publication of photographic work and short stories focused on one person during the period.

We would also like to extend our thanks to all who expressed interest in the BUILDING AS WITNESS Project Awards for your time and thought. The judging panel wished to note the high calibre of all proposals received as part of this competitive Open Call.

BUILDING AS WITNESS is kindly supported by the Department of Tourism, Culture, Arts, Gaeltacht, Sport and Media under the Decade of Centenaries Programme 2012-2023.