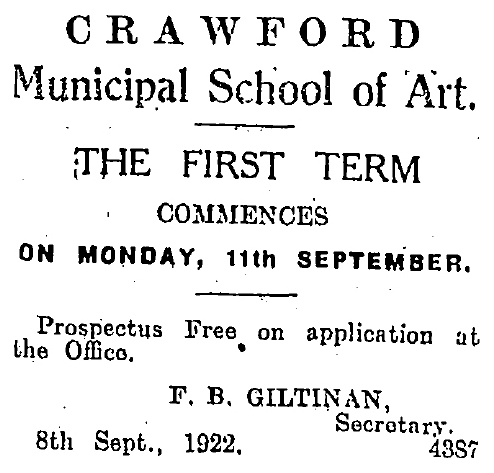 It was stated there were over 6,000 tickets distributed to the children. The number of sections provided for is 90, each section comprising 72 children.  The first train on tomorrow (Wednesday) morning will leave the Glanmire terminus at 8.45, the succeeding trains following at short intervals.  The committee requests the appointed section holders and stewards to be at the station as early as possible.

An Examination will be held at the SCHOOL OF ART on SATURDAY, SEPTEMBER 16th, at 12 o’clock, for the purpose of awarding Thirty Free Studentships to Pupils at present attending any of the Primary Schools in the City of Cork.

Successful Candidates can attend the Evening Classes at the School of Art to the end of June next, and their Free Studentships may be continued for a second or third year if their attendance has been 70 per cent of the possible number.

Candidates are confined to those who are placed in the 6th Standard Class. Pupil Teachers in receipts of Salary are not allowed to complete.