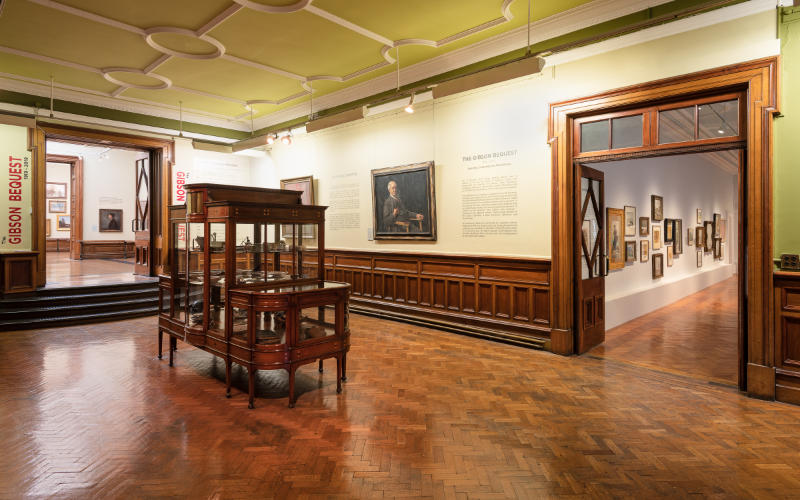 On 3 February 1919, Joseph Stafford Gibson died in Madrid. In his will, the native of Kilmurry, County Cork bequeathed his collection of ceramics, coins, engravings, miniatures, silverware, watercolours and £14,790 (today close to €750,000) ‘for the furthering of art in the city of his boyhood.’ Between 1920 and 1980, 210 works were acquired through the Gibson Bequest.

Gibson and was commissioned, according to his wish, to house his personal collection of objet d’art.

On 13 February 1922, the Gibson Committee approved the design for a ‘glass case’ by architect Daniel Levie (1875-1963) of Chillngworth & Levie. Manufacture of this was subsequently offered for tender, with Robertson, Ledlie, Ferguson & Co. Ltd. –

proprietors of The Munster Arcade at Patrick Street, Cork – ultimately securing the commission. The resulting mahogany cabinet bears the trademark Déanta i nÉirinn (Made in Ireland) on both ends and engraved brass plaques on both sides. James Archer (1871-1946) was entrusted with engraving the inscription, one in English and one as Gaeilge, the text of which was drafted by Gibson Committee chairman, Arthur Frederick Sharman-Crawford (1862-1943).

As reported in the Cork Examiner a special meeting of Cork County Council was called ‘To consider draft scheme for abolishing workhouses, establishing hospitals, home and other institutions, and reorganising and co-ordinating the Public Health services in the county and take such action in the matter as the Council may deem desirable’:

Including the following proposals:

If at the end of that period, the mother shall still be considered unfit to leave, then she shall be transferred to the Detention House, and her child shall be retained in a nursery until the age of 3 years, at which age the child shall be sent to an Orphanage or Junior industrial School or shall be boarded out.

‘I feel glad to say that the deaths from influenza last month clearly show that the decline in the epidemic is maintained. Very few amongst us in these counties realised the danger of the malady because the Metropolitan Press did not seem to look on the matter as vital or momentous. As a matter of fact, here was a virulence in some districts almost equal to the plague of 1918. It might be well for the public to realise that the medical profession does not really seem to know what the disease is – Influenza is a very convenient name’.

(‘Notes by Tatler’ from Nationalist and Leinster Times, 18 February 1922)