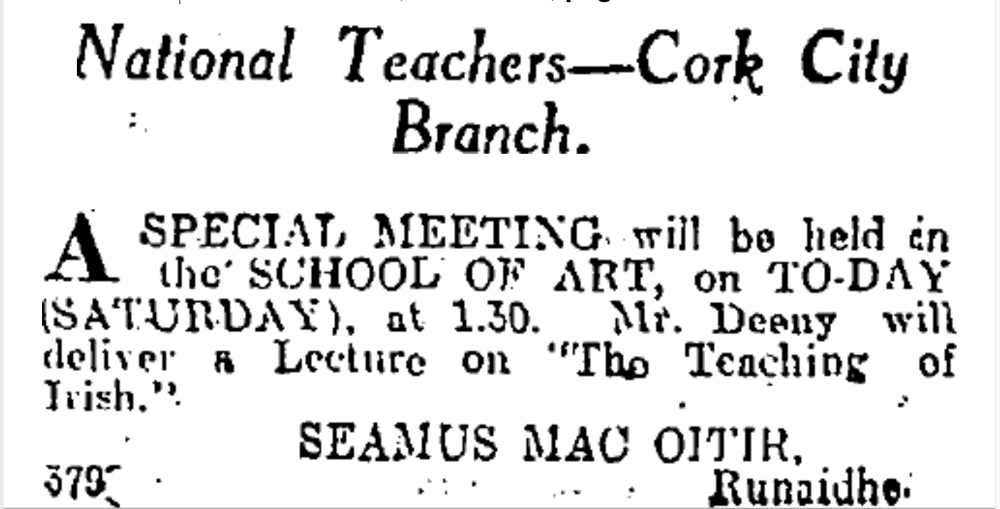 “A special meeting will be held in the School of Art, on to-day (Saturday) at 1:30. Mr Deeny will deliver a Lecture on the “Teaching of Irish.”

The Anglo-Irish Treaty Ratified by Dáil

The Anglo-Irish Treaty is ratified by the Second Dáil: 64 to 57 against. Most of those on the Treaty side did so on the pragmatic grounds, to avoid further war, rather than out of enthusiasm for the document.

‘At ten minutes to nine of Saturday night the Dáil Eireann voted on the Peace Treaty. It was ratified by 64 votes against 57. There was little demonstration in the Chamber but a crowd of 5,000 people outside received the news with cheers.

President De Valera, after the decision was announced, said that it would be his duty to resign. The Republic could only be disestablished by the Irish people, and until they in a regular manner disestablished the Republic constitution, it goes on and is the governing body of the nation.

Mr Collins appealed for a committee to be appointed, consisting of representatives from both sides to take over the machinery of the Government. President De Valera made no reply to this, but asked those who voted against the Treaty to meet him at the Mansion House (Dublin) on Sunday.

Mr Cathal Brugha said that so far as he was concerned he would see that discipline is kept in the army. The closing speakers were Mr. Cathal Brugha and Mr. Arthur Griffith, the latter eloquently urging the acceptance of the Treaty.