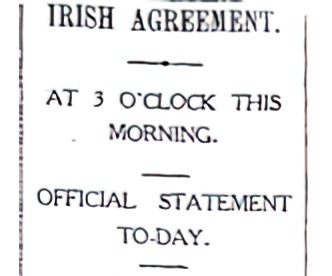 The Press Association adds: The Conference broke up at 2:15 am.

The Irish delegates came out first, and as they stepped into their car Mr. M. Collins was asked if he had any message to give to the Press. “Not a word,” he replied.

To the question as to whether he would come back again he replied: “I do not know”.

Lord Birkenhead and Mr. Churchill, both looking worn with the strain of their long sitting, were next to emerge from Downing Street.

The Press Association was informed by a number of the Cabinet that “an agreement has in fact been reached,” and that the terms will be communicated to the Press in time for Wednesday morning’s publications. (for 7 December 1921)

‘This announcement was undoubtedly the most acceptable that has yet been made in connection with the negotiations and coming at the approach of Christmas it will be most welcome news to all peace-loving people, not alone in Ireland and England but throughout the universe’.

The Leeside Players presented a performance of The Whiteheaded Boy by Lennox Robinson at Cork Opera House on 6 December 1921. A portrait of the the playwright, by his friend Margaret Clarke (1888-1961), forms part of Crawford Art Gallery's collection.

THE ARTS AND CRAFTS SOCIETY OF IRELAND EXHIBITION