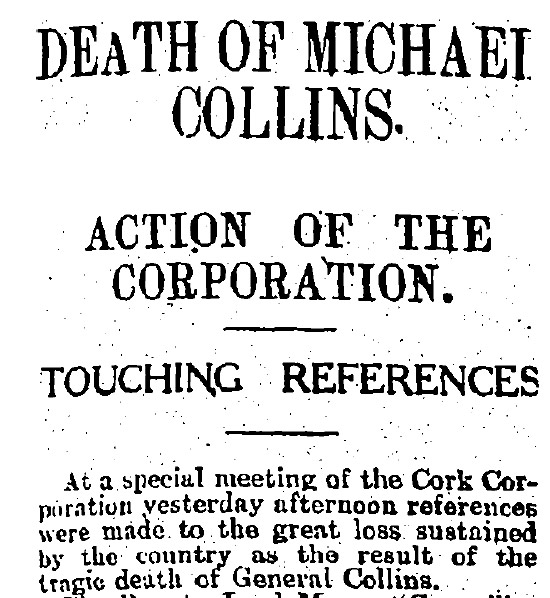 “…Councillor [Barry] Egan moved that the deepest sympathy and condolence of the Corporation be tendered to the relatives of General Collins in their great bereavement, and that the meeting should also be adjourned as a mark of respect to his memory. It was right and fitting that such a tribute of sympathy, respect and honour should be paid to the memory of the great Irishman who was murdered on the previous night [Tuesday 22 August 1922].

Barry Egan (1879-1954) was a formidable member of Cork political and business sectors. He was Deputy Lord Mayor of Cork upon the death of Terence MacSwiney and was elected to Dáil Éireann in 1927 for the Cork Borough constituency. Egan was managing director of the family silversmith company, William Egan & Sons when the Patrick Street shop was burned during the Burning of Cork in November 1920 during the War of Independence. He was also a member of the Cork School of Art’s Gibson Bequest Committee.

“The fallout from [Arthur] Griffith’s death was nothing compared to the impact of the killing of Michael Collins on 22 August at an ambush at Béal na Blá in his native west Cork, from a bullet fired by an IRA member. He had been touring Cork to liaise with his political and military networks and perhaps to persuade some of his opponents on to another path, or else because of deception about talk of possible peace. His death inevitably created an intensification of the war and also led William T. Cosgrave (1880-1965) assuming the position of chairman of the provisional government. […] The anti-Treaty side’s response to Collins’s death was mixed; some were vexed by the purple prose of the eulogies, but for many soldiers and politicians ‘this was also a very private kind of loss’.” [source: Diarmaid Ferriter, Between Two Hells: The Irish Civil War, (Profile Books 2021) p57]