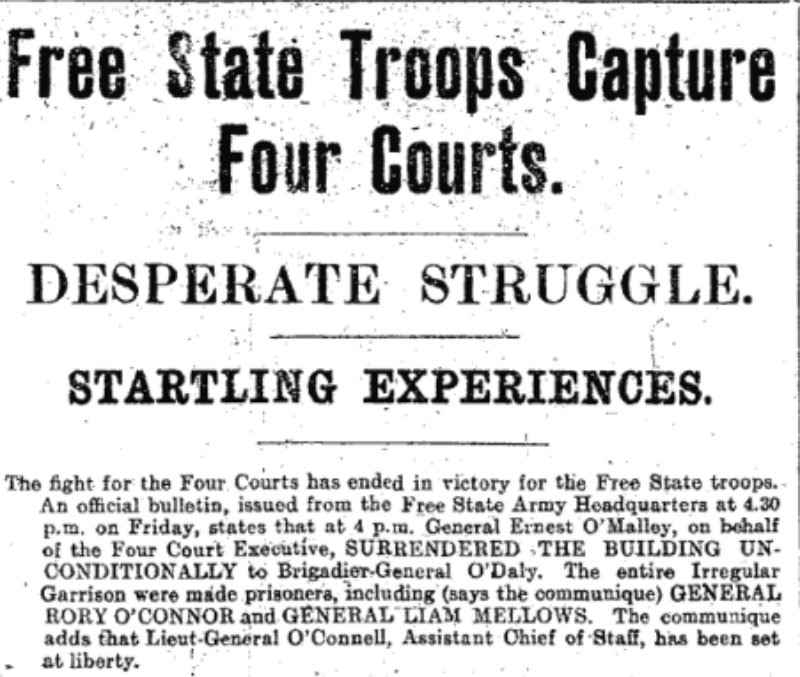 ‘The final struggle for the building was terrific. It began on Thursday night with a terrific bombardment by the attackers, and when breaches had been made, the effort to storm the building was made. It is stated about 200 Free State troops took part. When part of the main building was being stormed there was a fearful explosion, which resulted in a heavy casualty list. …After the explosion mentioned, there was a temporary truce, and twenty doctors arrived to attend to the wounded. Then the fight was renewed. The Four Courts went on fire, but three hours later the Irregulars [Anti-Treaty IRA] hoisted the white flag, and firing ceased. Throughout areas in the City of Dublin snipping and fighting continues.’

Letter to the Editor
Cork Reconstruction

‘Sir, - …the cultural area may be developed at Emmet’s Place by acquiring the block on the south side, adjoining the river. Here the Technical School and Free Library could be erected adjacent to the School of Art and Theatre. Beautiful buildings look their best on a river side, and the approach to the centre of the city from the north would be considerably enhanced in appearance.

In matters of this kind, finance governs everything; but whether the acquisition of the sites suggested would be more costly than a main drainage scheme, and bridging 400 yards of the south branch of the river, is a matter for experts to consider, - Yours truly, “REFLECTOR”