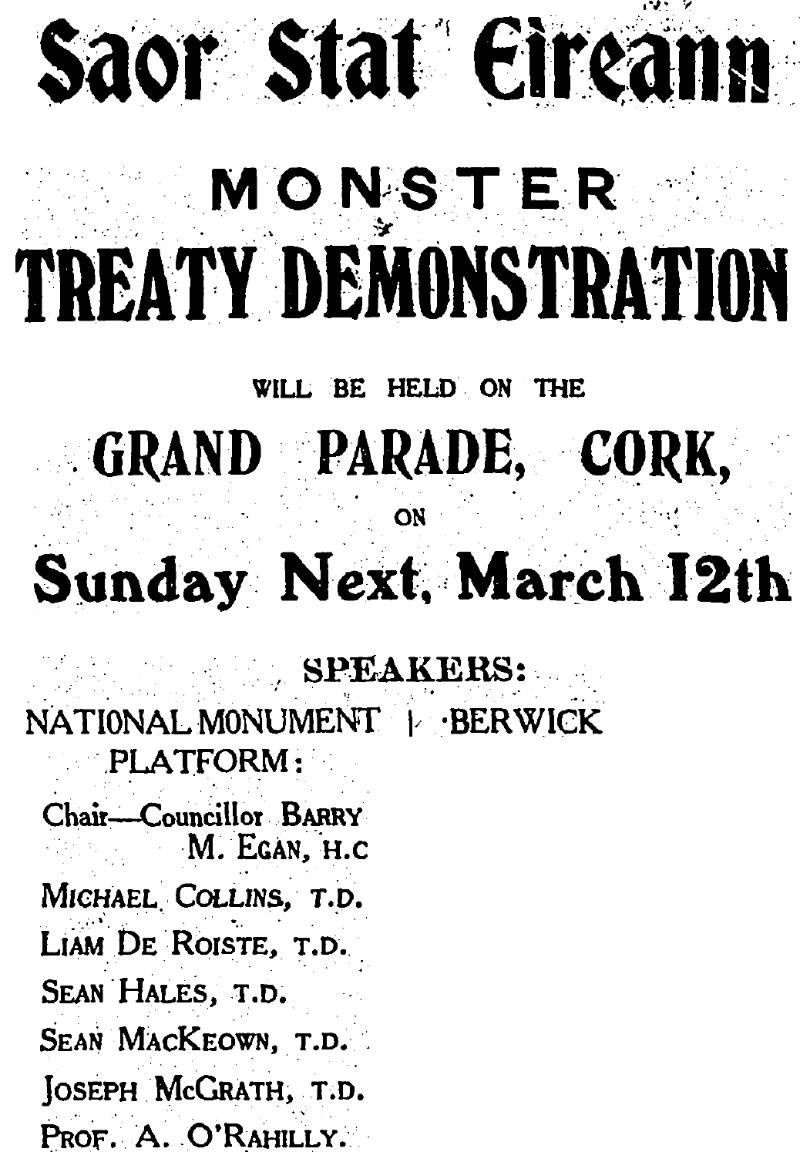 'Mr French moved the re-election of Mr. Sharman Crawford as Vice Chairman for the ensuing twelve months. It was not necessary to say any of the nice things that Mr. Crawford was deserving of; these things had been said so often that he refrained from doing so that day. No man deserved to be honoured by that committee than Mr. Crawford for he had rendered unselfish services to technical education...

On the motion of Mr. [George] Nason, [President of Cork Trades and Labour Council] and seconded by Mr. [George] Duncan, it was agreed that in future the first meeting of each month should be held in the School of Art at 4 o'clock and the second meeting in the Technical Institute at 8 o'clock…

On the motion of Mr. [Sean] French, seconded by Mr. [Barry] Egan. permission was granted the Town Planning Association to hold their meetings in the School of Art.’

Michael Collins and his party ‘subsequently attend a concert at the Opera House. The function however excited some opposition. The concert was timed for 8:15, and shortly after a number of men rushed the house. They divided into three parties, and entering the balcony and circles and the pit and stalls, they threw red pepper over the theatre.

‘The effect disturbed the whole audience. The party in the gallery sang the “Boys of the First Cork Brigade” and “The Soldiers Song” and cheered for de Valera.

‘When Mr Collins and his party entered at 9 o’clock they were loudly cheered, the party in the gallery continued demonstrating. Ultimately Mr. P. O’Keefe addressed the audience and matters quietened down. About a quarter of an hour later two shots were fired in the gallery. Two further items of the programme were gone through when a lady apologised for the curtailment of the programme, and said she was sure they would understand the reason. The curtain went down. The audience left the theatre.’

On behalf of the Irish Republican Soldiers (1916-1921) and the Prisoners of War Association the following statement has been issued from the Mansion House, Dublin:-

“The war in Ireland is now happily ended. It has, however, left in its trail many cases of destitution and numerous disabled and partially disabled soldiers of the Republic who took a noble part in the fight of freedom, and many who lost their health and means of livelihood by being in prison and internment camp during the period of 1916-21.

“An association has been formed to embrace all these and others who will assist in promoting its objects, which are briefly – the securing of employment for all unemployed, the reinstatement of those victimised, and financial aid for these disabled, partially disabled, and destitute members.

Branches of the association are being immediately formed in each parish area, and all the persons affected, together with those willing to assist, should be enrolled, the latter paying a subscription of one shilling per month, and proper unemployed registers prepared. It is proposed that the branches …will deal with all simple local cases that present no great difficulty, and that the larger questions of the disabled and partially disabled members, those incapacitated by reason of imprisonment and internment, and also victimised national and local public servants, will remain to be dealt with by the National Executive on report from the local committee, properly supported by statements from the responsible I.R.A. officers and local medical officers where such is needed’.