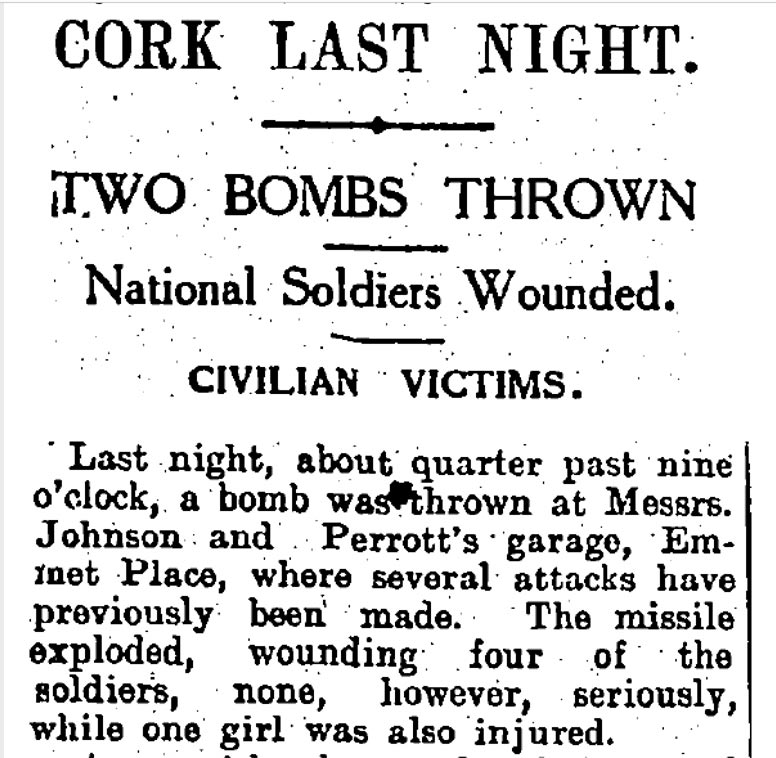 “Last night Moore’s Hotel, Cork [Morrison’s Quay] was attacked from three directions, bombs and a machine-gun being used by the irregulars. Almost simultaneously bombs were hurled into the yard at Catfort [between Nano Nagle Place and Elizabeth Fort], while there was some sniping at Emmet Place, and also it is stated, in the vicinity of Sullivan’s Quay.

None of the troops were hit, but some civilians were wounded, none very seriously. One girl, however, Miss Kathleen Curtin, of St. Finbarr Street, was wounded just above the ankles, near her home, and she is at present detained in the Mercy Hospital. She also has a slight wound in the shoulder-blade.”

“Last night, about quarter past nine o’clock, a bomb was thrown at Messrs. Johnson and Perrott’s garage, Emmet Place, where several attacks have previously been made. The missile exploded, wounding four of the soldiers [Pro-Treaty], none, however, seriously, while one girl was also injured.

A second bomb was also thrown, and an outburst of firing followed. The troops replied, but the attackers made their escape under the cover of darkness.

Of the four soldiers, who were removed to the Mercy Hospital subsequently, one was injured in the feet in four places, by bomb splinters, but not seriously. Another had a shrapnel wound in the heel, rather serious, as is a third who was hit in the thigh. The fourth, injured in the foot and hand, was not detained.

The girl was Miss Delia O’Brien, aged about 17, of 5 Emmet Place [today above Costa Coffee] and she, too is not badly injured. Another girl named Morrisey, from Cornmarket Street, is said to have been slightly injured. Later there was some firing in the South Mall area, but no casualties are reported.” [source: