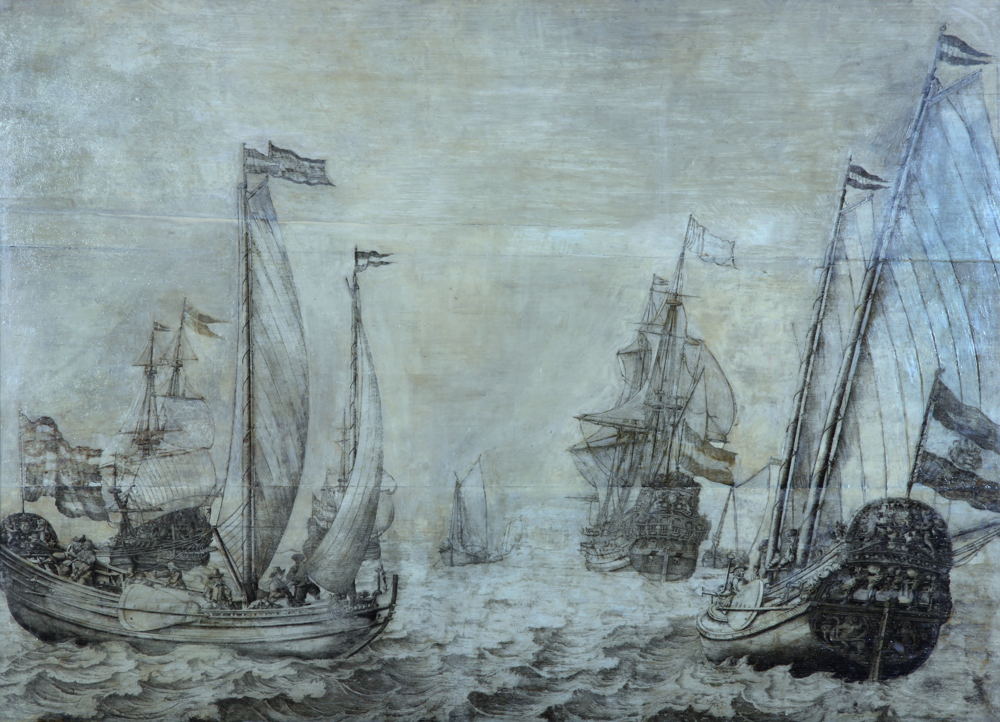 Did you know that, historically, the fleet of the Dutch West India Company frequented Cork Harbour to provision and trade? In fact, there are numerous Dutch connections in the city, from the storied Mardyke (meerdijk) to two of the architects associated with our own building, Claud Leuventhen (1724) and Erick van Egeraat (2000).

Dutch Vessels (c.1650) is attributed to Willem Van de Velde the Elder (1610/11-1693), a marine painter and draughtsman from Leiden who held an official role as artist of the Dutch fleet. In 1666, he is known to have observed two notable sea battles between the Dutch Republic and England. After 1672, he received a marine commission from King Charles II and resided at Greenwich and, later, London.

The ships depicted in this grisaille (grey monochrome) painting are, however, an imagined collection of Dutch vessels. On the left of the scene is a passenger boat, or kaag, with its distinctive leeboards designed for navigating shallow waters. On the right is the statenjacht which would have carried important dignitaries, while in the centre is a pinnace, or proto-frigate, used alternately as an escort, pirate hunter, and for attacking enemy trade ships.

On close inspection, the boards on which this work is painted are visible in bands across the surface. There is also evidence of significant overpainting which, at present, makes it somewhat difficult to accurately assess. It nevertheless offers a fascinating window into the maritime past.