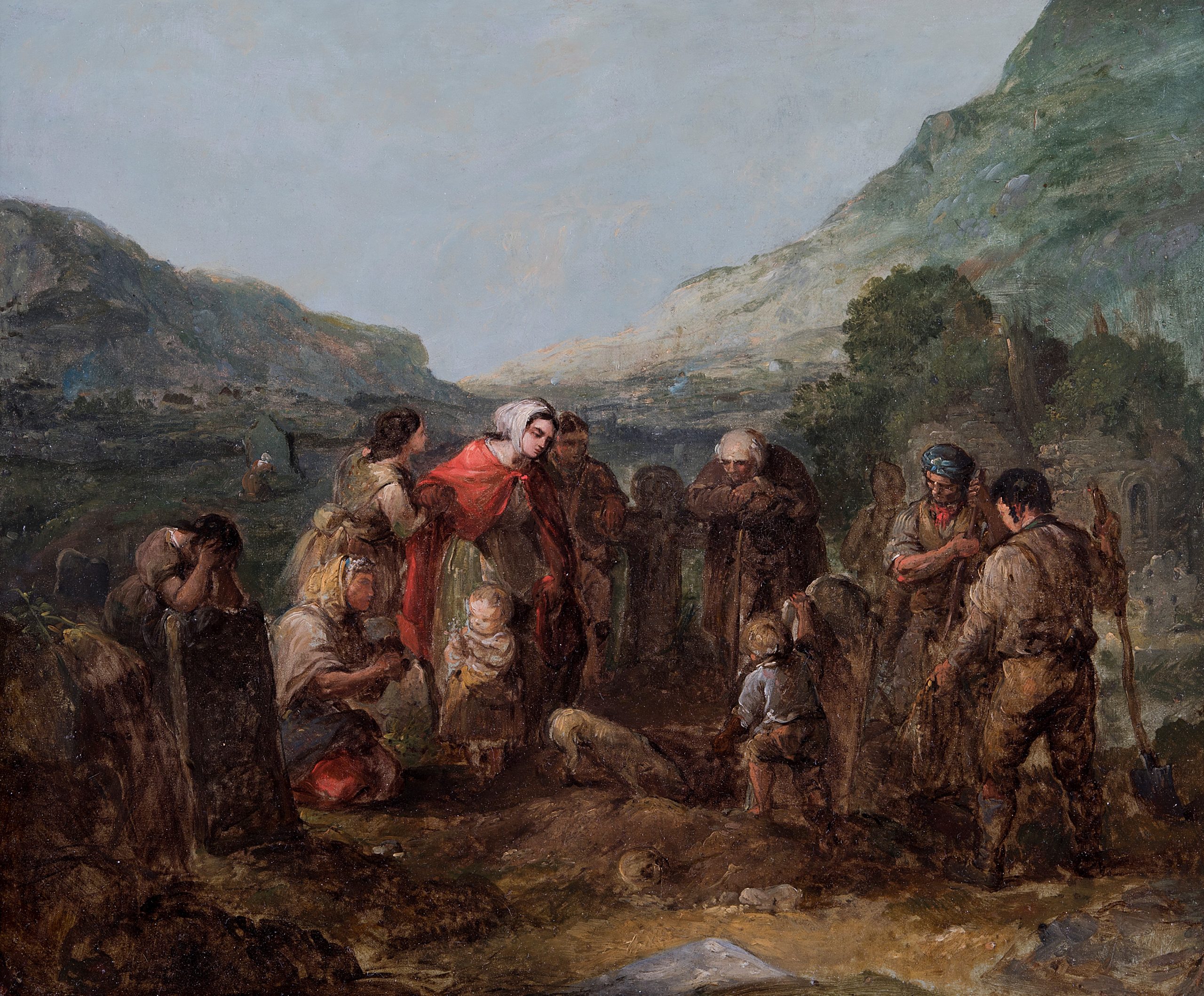 CAG.3051 Daniel Macdonald, The Village Funeral – An Irish Family by a Graveside during the Great Famine, c.1850, oil on canvas, 47.5 x 56 cm. Purchased, with the assistance of the Department of Culture, Heritage and the Gaeltacht, 2018.

Our most recent acquisition - The Village Funeral by Daniel Macdonald - is now on display!

An important reflection of Irish rural life and ritual during An Gorta Mór, the Great Irish Famine (1845-52), this significant painting was purchased in October with assistance from the Department of Culture, Heritage and the Gaeltacht. Set within a similar landscape to that of Macdonald’s Eviction Scene (c.1850), the work depicts a funeral in progress as villagers, young and old, gather around the open grave of one they have lost. The figures assembled register different stages of grief, while the artist also includes a curious dog and ominous skull.

Daniel Macdonald (1821-1853) is one of the few Irish artists of the nineteenth century who depicted country people without excessive idealising or sentimentalising. He made his debut as an artist aged just 13 and, in 1841, exhibited three paintings at the Cork Art Union. Moving to London, MacDonald counted Prince George and Princess Mary of Cambridge among those who sat for their portraits. Notably, Queen Victoria herself acquired a drawing by the artist, entitled Going Home After a Funeral (1842), which remains in the Royal Collection today.

Acquisition of The Village Funeral has enabled us to close a gap in the collection surrounding death and mourning in Irish culture. It also strengthens our MacDonald holdings and completes a suite of works concerning key aspects of Irish life in the mid-nineteenth century.

Although our Bust of Asclepius dates to the nineteenth century, it is a partial cast of a second-century marble sculpture, which was itself a copy of an earlier Greek sculpture by Timotheos! Are you still with us? Now in the collection of the Musée du Louvre, the full marble version had been among the antiquities seized by Napoleon’s forces following the Treaty of Tolentino in 1797.

Tune in to The Arts House with Elmarie Mawe on Cork’s 96FM and C103FM every Sunday morning as Conor Tallon chats with assistant curator Michael Waldron about each WORK OF THE WEEK!