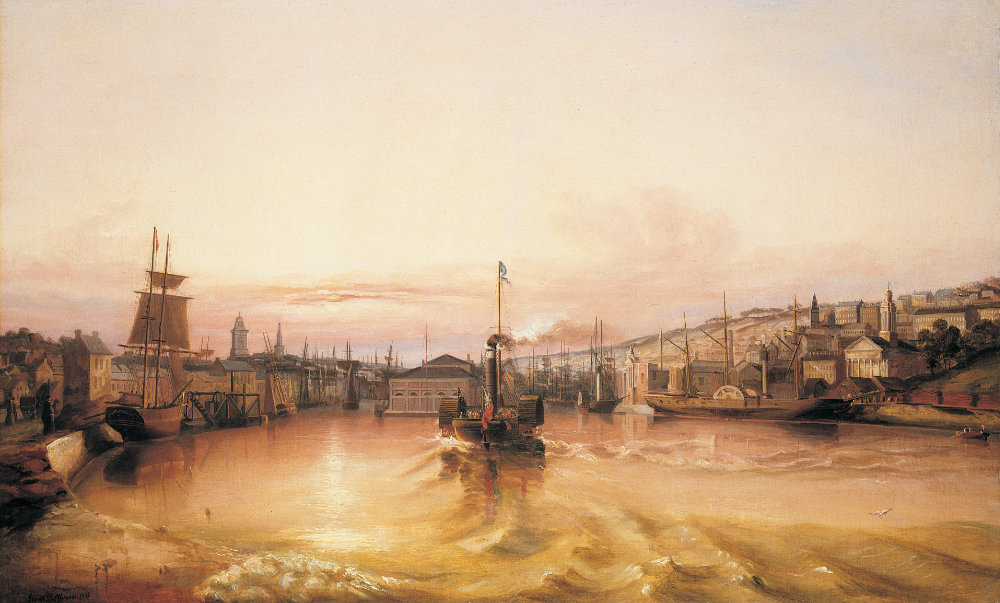 WORK OF THE WEEK… it’s a kind of homecoming, like!

Sun sets over a maritime city, as river waters ripple in the wake of a seagoing vessel. Like the tide itself, Paddle Steamer Entering the Port of Cork (1842) is all about comings and goings.

Approaching Cork by water was once much more commonplace than today and it was a sight that artist George Mounsey Wheatley Atkinson (1806-1884) knew well. A native of Cobh, he grew up in Cork Harbour and spent his early career at sea as a ship’s carpenter. Upon his return, he became Government Surveyor of Shipping and Emigrants, as well as a self-taught painter.

In this warm and welcoming painting, the artist depicts a paddle steamer making its way upriver to the Port of Cork. The historic Bonded Warehouses may be picked out at the centre of the scene, while dozens of masts break the skyline on both channels of the river, emphasising the importance of the harbour to the city’s commerce, prosperity, and identity.

Flanking the river on either side, the church steeples of St Anne’s, Shandon and St Patrick’s (right) and old St Fin Barre’s Cathedral and city hall (left) can be readily identified. The fine offices of the St George Steam Packet Company (Penrose House) can also be glimpsed between moored vessels at Penrose Quay (centre right).

Wherever you may be this festive season, we wish you all safe harbour, fair winds and following seas.

Paddle Steamer Entering the Port of Cork (1842) is featured in STATIO BENE: Art and Ireland’s Maritime Haven until April 2021.