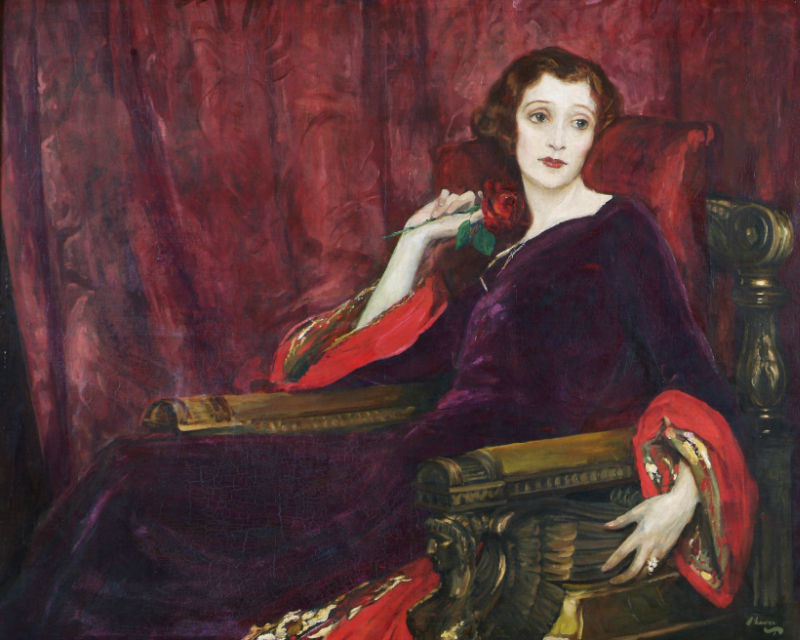 This WORK OF THE WEEK is a real old favourite!

The Red Rose (1923) is one of the most recognisable portraits John Lavery made of his wife and fellow painter, Hazel Lavery, whom he first met in 1903 while on a painting trip to Brittany. They would marry six years later. Subtitled ‘Hazel’, it is among the works in public galleries that Lavery lists in his memoir, The Life of a Painter (1940).

Hazel’s skin is almost alabaster in contrast to the richly coloured tones of red and purple that predominate Lavery’s composition. Whereas the artist effortlessly describes the luxurious velvet and silk textures of her dress, it is her wistful expression and placement of her hands that captivate the viewer: lost in thought, she looks to one side as her right hand delicately holds a single red rose – a symbol of true love – against the elegant line of her neck, while her left – adorned with wedding ring – gently fingers the carved wings of a sphinx.

In Greek mythology, the sphinx (part woman, part lion, part bird) wielded strength without mercy, unless her riddle could be answered. Does The Red Rose – and, by extension, its sitter – possess a mystery to be unlocked?

Curiously, Belfast-born John Lavery (1858-1941) began working on this canvas eleven years before he was to meet Chicago-native Hazel Martyn (1880-1935). Further adding to the mystery of this beloved work, beneath Hazel’s likeness are portraits of Mrs William Burrell, stage actor Sarah Bernhardt, and Viscountess Curzon.

More popularly known as Lady Lavery, following her husband’s knighthood, from 1928 onwards Hazel was to grace Irish banknotes in the guise of Kathleen Ni Houlihan.

Tune in to The Arts House on Cork's 96FM and C103 Cork every Sunday morning as Conor Tallon chats with assistant curator Michael Waldron about a work from the collection!