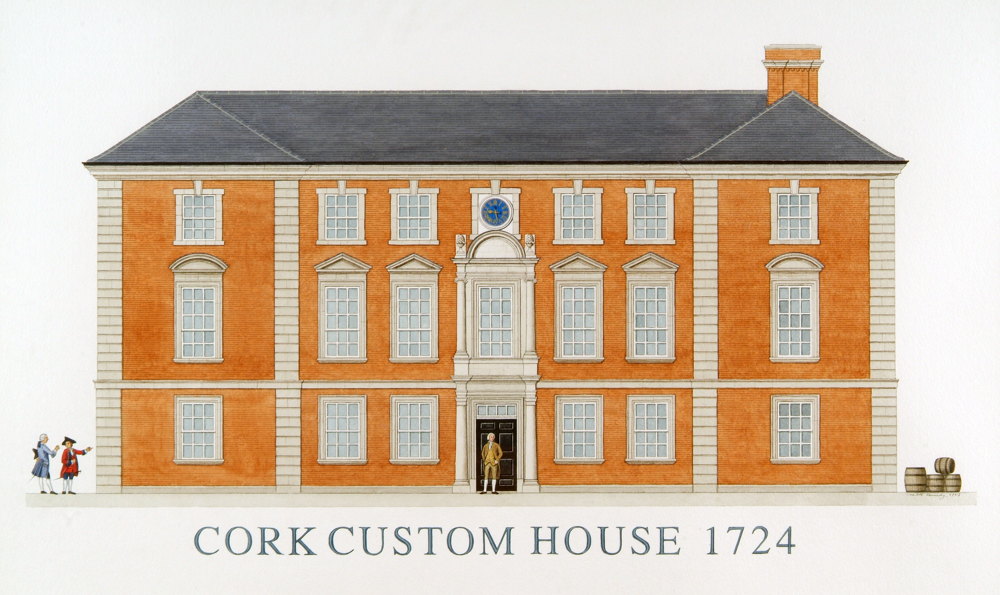 We're investigating our own building’s past with this WORK OF THE WEEK!

Conjuring up an image of what once was, Charlotte Kennedy’s Cork Custom House 1724 (1997) offers an elevation view of the oldest wing of Crawford Art Gallery. This eastern perspective is still familiar to visitors today, although with added turret and more modern neighbours!

Built 'at the King's expense' in 1724 as the Custom House of Cork, it became one of the principle civic buildings of the city. It is present in John Carty's map of Cork in 1726 and was described by Waterford apothecary Charles Smith (1715-1762) as 'a large elegant building' complete with ‘several offices for the management [...] of the excise and customs of this port.' Possibly designed by Claud Leuventhen – architect of The Red House in Youghal – its style is distinctively Anglo-Dutch in character with classical elements.

Symbolising hospitality and Cork's international trade with the Americas and West Indies, two carved limestone pineapples may still be seen flanking the clock just above the central window on the exterior of the building.

As the artist gently indicates with barrels and elegantly dressed individuals, this was a working building on an open quay. Now the site of Emmet Place, the quayside was once 'furnished with cranes and other conveniences for the discharging of goods.' Smith also notes 'that several vessels may lie there at a time.' The building itself was flanked on either side by 'store-houses, which form two handsome piazzas.'