The Art of the Silhouette in 19th century Cork 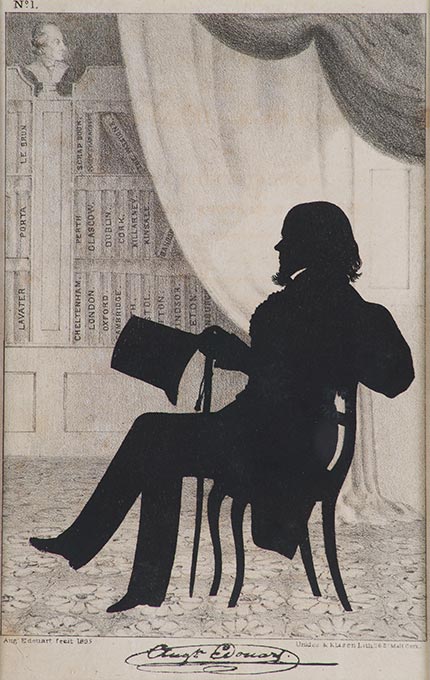 Augustin-Amant-Constant-Fidèle Edouart (1789-1861), born in France, was a member of Napoleon’s army. After the Napoleonic Wars, he lost most of his property and was forced to move to England in 1814. He first tried to make a living teaching French, but soon turned his attention to hair art. He made devices and landscapes in human hair -“mosaic hair works”- and also models of animals covered with their own hair.

Around 1825 Edouart began silhouette cutting and was able to snip a perfectly executed silhouette likeness in less than 5 minutes. He adhered strictly to the limitations of his art, and did not add brushwork to embellish his silhouettes, as others did, but rather indicated the whites of collars and handkerchiefs by cutting away parts of the black paper to expose the white mount beneath.

He had a large and profitable practice in London, but like other practitioners in his form of art he moved about from place to place, visiting the large towns in England, Scotland and Ireland. In 1830 he moved to Edinburgh, where he cut silhouettes of the court of the exiled Charles X of France.
He moved to Dublin in 1833. He took rooms at 27 Westmoreland Street, and there held an exhibition of his works, his models of animals as well as his silhouettes. His studio soon became crowded with sitters, and during his stay in Dublin he took six thousand portraits. His work was favourably noticed in the Dublin papers.

Edouart moved his practice to Cork in 1834. Edouart took rooms at 77 Patrick Street, from where he set off to Kinsale, Bandon, Youghal and other nearby towns, taking hundreds of portraits. While in Cork he employed Unkles and Klasen, 26 South Mall, to print lithographed background, on which he mounted his silhouettes. In 1835 his book A Treatise on Silhouette Likenesses was published by Longman and Co., Paternoster Row, and J. Bolster, Patrick Street, Cork. It contained full-page illustrations of portraits and fancy subjects lithographed by Unkles and Klasen, including a self- portrait.

Edouart went to America in 1839 were he remained for ten years, cutting and cataloguing silhouettes of the most important Americans of the time. He always cut his silhouettes out of doubled paper, and retained one copy in a set of bound volumes. When he was in Cork these volumes already contained over fifty-thousand silhouettes.
In 1849, Edouart set out to return to England on the ill-fated ship, Oneida, which wrecked off the island of Guernsey. Although all of the passengers and crew were saved, only fourteen of Edouart’s folios were rescued. The volume containing the portraits done in Cork was saved.

The sufferings he was exposed to, and the loss of almost all his books containing duplicates of his silhouettes, the greater part of his life's work, so affected him that he never again followed his profession. He returned to France where he died at the age of 72.

Unlike Edouart, who only started to embellish his silhouettes with pencil or chalk in 1842 –probably due to the overtaking of his profession by photography- Cork silhouettist Stephen O’Driscoll (c. 1825-1895) often touched up his figures with gold or paint.

O’Driscoll was based in Pembroke Street, Cork and worked as a lithographer. He produced a number of caricature portraits and silhouettes, which found ready sale in local print shops. Over the years, O’Driscoll produced portraits of most of the prominent citizens of Cork, as well as street characters and beggarmen.Later in his career, he worked with his daughter Mary. Together they completed a large picture with hundreds of silhouette figures, Assembly of Citizen in front of Commercial Buildings, South Mall (1870),now in Cork Public Museum.