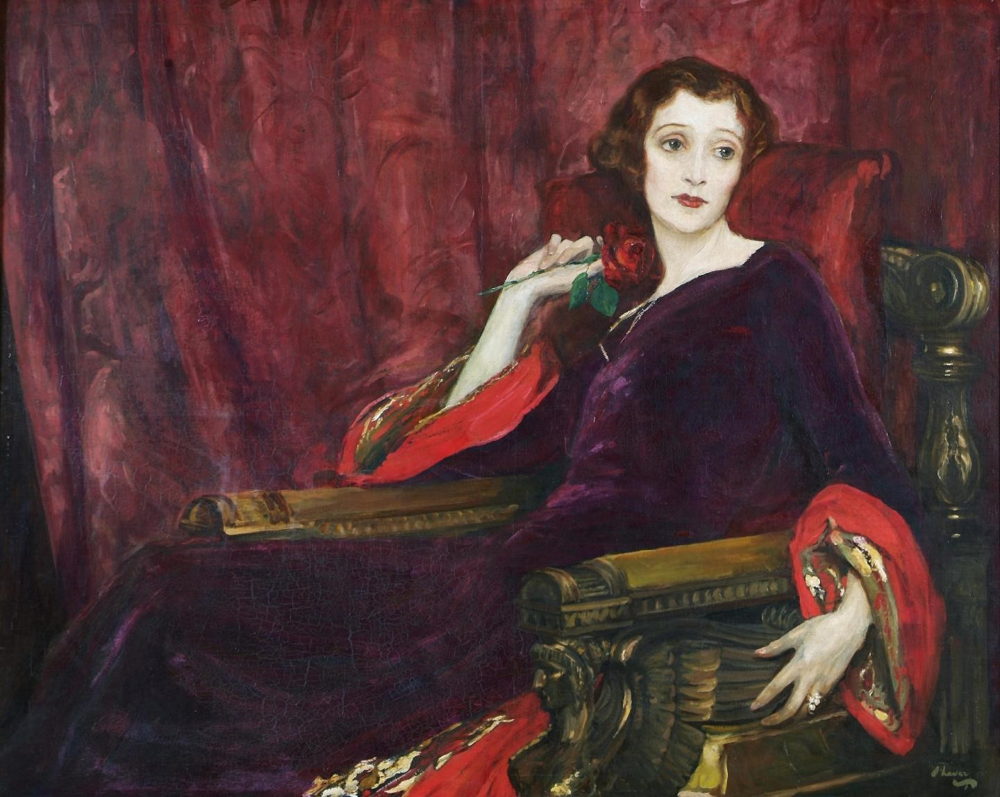 This is a large painting of Lady Hazel Lavery, by her husband, the portrait artist John Lavery. Here we can see Lady Lavery sitting back in a beautiful golden chair with red drapes (curtains) behind her. She is dressed in a purple dress with red and gold details and she holds a red rose delicately to her pale neck as she looks off into the distance.

Lady Hazel Lavery was born in Chicago in 1880 and had Irish ancestors. She was educated at the best schools in Chicago, where she received dance and music lessons.

Hazel married the portrait artist John Lavery and they lived in London. Hazel also loved to sketch and paint. During World War I, John became an official artist for the British Government. He was given a knighthood, which meant that he was called ‘Sir’ from then on and Hazel became ‘Lady’ Lavery.

Hazel played an important role in the struggle for Irish Independence by bringing together Irish and British sides for the Anglo-Irish treaty discussions in her home in London.

When Ireland got its independence, the Irish Free State asked John Lavery to create an image of a lady to represent Ireland for the new Irish bank notes. He used Lady Lavery as his model and her image appeared on Irish bank notes from 1928 until the 1970s and again as a watermark on later banknotes, until the Irish punt (pound) was replaced by Euro notes and coins in 2002.

Do you know what a watermark is?

A watermark is an image on a piece of paper that you can only see when you hold it up to the light. A watermark is used to help people to make that important or valuable documents and papers (like money!) are not fake. If you have some banknotes at home, why not hold them up to the light and see what secret pictures you can find? You could also have a think about the design of the Euro banknotes we use today, and Google different currencies and older kinds of banknotes and money to see how they have changed over the years.

What is she leaning on?

Lady Lavery was made famous by appearing on Irish money. Here, we can see her wearing a shawl and leaning on something… Do you recognise what she’s leaning on? Clue: this item was featured in last week’s Talking Pictures!

Before cameras and photography were invented, people had to sit still for hours while somebody painted their portrait. Lady Lavery sat for more than 400 portraits by her husband. She must have had lots of patience! Do you think you could sit still for that long?

The Rose of Tralee

The rose in this painting reminds me (Hazel Hurley) that the Rose of Tralee International Festival would have been happening in Kerry this week, but for the first time since it started 61 years ago, it has had to be cancelled. This is because we are all doing our best to protect one another from the Coronavirus and we cannot be together in big groups right now.

Have you ever watched the Rose of Tralee? It is a competition where young women with an Irish connection from all over the world travel around Ireland in a group, making friends and being interviewed. At the end of the Festival, one of the women is awarded the title of the ‘Rose of Tralee’ by a panel of judges.

The Rose of Tralee

Can you pick out the words that are used here to describe the Rose of Tralee? Do you think they tell us a lot about who she was as a person?

It’s nice for a person to be pretty but there are lots of other characteristics we could sing about too! The Rose of Tralee is chosen not just for being ‘lovely and fair’ but also for their personality and for being a good role model and ambassador for the Rose of Tralee Festival and for Ireland.

Lady Lavery, with her ‘almond-shaped hazel eyes’, was known for her beauty, but what about all the interesting things she did in her life and her characteristics and qualities as a person? Have a think about the things you like about your personality and how you interact with your friends, families and all the other people you come into contact with day-to-day!

Let’s write a song about a good person

Let’s write our own song about traits that we like in ourselves and other people. It could be someone you know or a make-believe person. Maybe they go on an adventure that tells us more about them? You can use the words below to help you and the tune of the ‘Rose of Tralee’ if you like, or make up your own! Have fun!

Let’s make our own make-believe money!

Lady Lavery appeared on Ireland’s old money, but we can put our faces on money too! Let’s make our own money to play with.

Now that you’ve made your own money from the bank of yourself, you can think of a game to play with it, or you could even try to trick your family or friends into thinking that it’s real money and buy something from them! Would this make you a bad person? Nahhh!