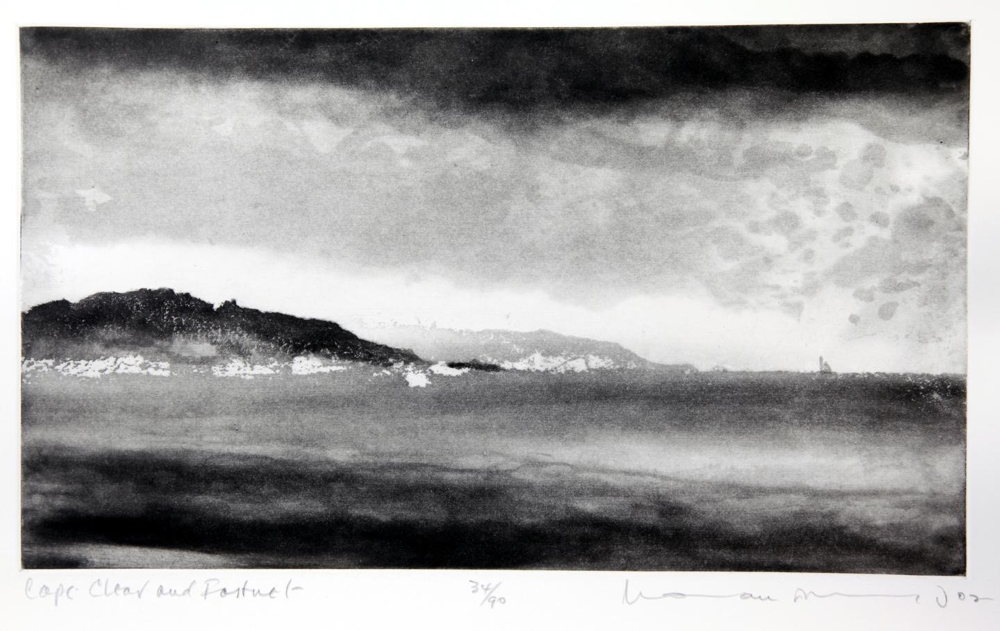 Norman Ackroyd is an English artist who creates mostly black and white watercolours and etchings of landscapes. Here he has created an etching of Cape Clear island, on the left, and Fastnet lighthouse, on the right, in West Cork, on what looks like a dark and gloomy day.

What is an etching?

Etching is a method of print-making that uses chemicals to cut lines into a metal printing plate. The printing is done by rolling ink across the surface. The ink sinks into the cut areas and creates the image and the metal plate is then pressed onto paper to give you a print.

Here is a cute song about living in a lighthouse. You can find a recording of the song online and sing along with the lyrics below.

I Wanna Marry a Lighthouse Keeper by Erika Eigen

These are the Great Lighthouses of Ireland. There are even more lighthouses than this in Ireland, but these are ones that are good for visiting and you can even stay the night in some of them! Do you think you could visit all of these lighthouses? Which lighthouse is closest to your house? You could make a lighthouse part of this year’s staycation. Or perhaps someday when you are older, you could go to see them all.

Can you imagine what your life would be like if you lived in a lighthouse?

How would you start your day?

Who would your friends be? A seagull? A dolphin? A seal?

What would you eat for dinner? Fish caught from the sea? Or would you get a takeaway of burgers and chips delivered on a boat?

What would you do for exercise? Run around in circles? Run up and down the spiral staircase?

What would you do for fun? Play cards? Do a jigsaw? Read a book?

Would you like to draw a picture or write a story about your life in a lighthouse? Go for it!

Last month for Cruinniú na nÓg, children from around Ireland wrote stories and poems and drew pictures all about lighthouses as part of a project called Young Storykeepers. You can see their beautiful work at this link and maybe you will be inspired to create your own story or drawing about lighthouses.

We can make our own lighthouse from items we would have at home.

How to make a lighthouse