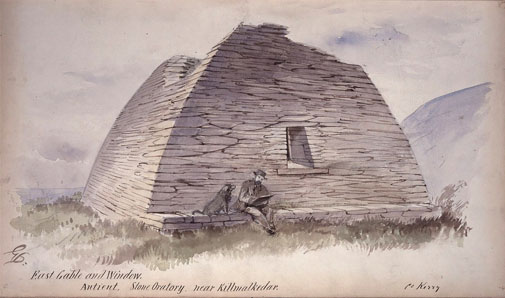 An artist imbued with a keen appreciation of the sciences—particularly geology, botany and zoology, George Victor Du Noyer is also remarkable for his devotion to recording the antiquarian and archaeological sites that are such a  characteristic feature of the Irish landscape. Born into a Huguenot family in Dublin in 1817, while still a young teenager, Du Noyer was apprenticed to the artist George Petrie, who headed the Topographical Department of the Ordnance Survey. After leaving the Ordnance Survey, Du Noyer worked as an art teacher at the College of St. Columba and was then employed by the newly-formed Geological Survey of Ireland. Over the course of a half century, he travelled the length and breadth of Ireland, sketching and recording as he went. Thousands of drawings and sketches by him are preserved in the libraries and archives of institutions such as the Royal Irish Academy and the Royal Society of Antiquaries in Ireland. However, due to the fragility of these works, they have rarely been exhibited. In the archive of the Geological Survey, for example, are hundreds of drawings and watercolours of landscapes and coastlines, particularly of Antrim, Wexford, Waterford, Cork and Kerry, while in the Botanic Gardens, are exquisite watercolours of Irish apple varieties, roses and other botanical specimens.

Vastly prolific, Du Noyer recorded dispassionately, and accurately, throughout his working life, eventually amassing over five thousand images, most of which were done ‘en plein air’ as he travelled. Somewhat overlooked by art history, the last significant exhibition of his work, curated by Fionnuala Croke, was held at the National Gallery of Ireland over twenty years ago.

In celebration of Du Noyer’s extraordinary achievements, and to commemorate the bi-centenary of his birth, the Crawford Art Gallery will host a major survey exhibition, featuring over one hundred and fifty watercolours and drawings. Opening in November 2017 and continuing until the end of February, 2018, the exhibition will be curated by Peter Murray, former Director of the Crawford Art Gallery, in collaboration with Petra Coffey and the Geological Survey of Ireland, Stones, Slabs and Seascapes: George Du Noyer’s Images of Ireland will feature loans from the collections of the Royal Irish Academy, the National Museum of Ireland, the National Botanic Gardens, Glasnevin, the Royal Society of Antiquaries of Ireland, the Geological Survey Ireland, and the National Archives. A full colour catalogue to accompany the exhibition will feature articles by Peter Murray, Siobhan Fitzpatrick, Peter Harbison, Petra Coffey, and Nigel Monaghan.An extensive “learn and explore” programme, encompassing many of the subjects that Du Noyer was interested in, and featuring public talks, tours, and themed workshops aimed at children and adults alike, will take place on an ongoing basis throughout the exhibition.
Exhibition sponsored by Department of Culture Heritage and the Gaeltacht, Geological Survey Ireland, Carmel and Martin Naughton and National Museum of Ireland. Slabs and Seascapes will be shown in the Crawford Art Gallery, Cork, 2017 and the National Museum of Ireland, 2018.