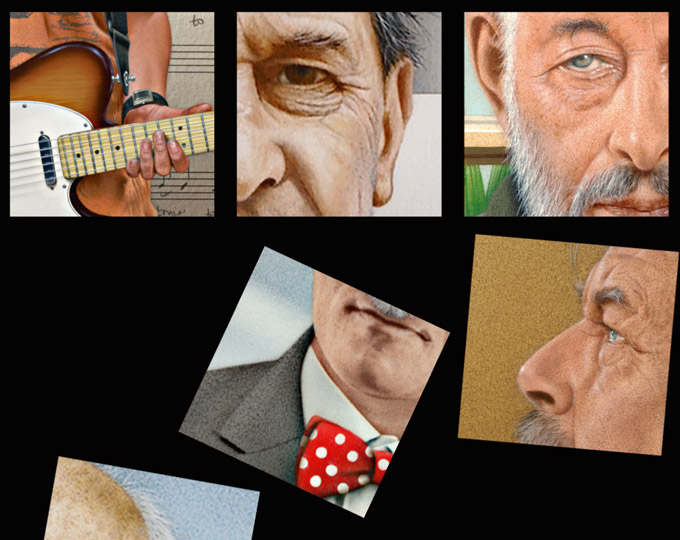 Crawford Art Gallery is delighted to present 'Seven' - an exhibition of fourteen paintings by Robert Ballagh.

Seven self-portraits and seven portraits of political and cultural leaders has been assembled to mark the seventh decade in the life of an artist whose career began in the 1960’s and who over the years has not wavered from advocating his ideas and ideals, however controversial, through both art and political activism.

Guided by a moral compass that is no way uniquely Irish, but does stem partly from the traumas of Irish history and society, Ballagh’s life and work reflects a belief in the power of the people and the importance of visionary leaders. His choice of sitters, a personal pantheon of cultural and political heroes, reflects also his individualistic approach and reveals an optimism for the future.

The seven portraits are united by their informality yet at the same time, the poses have a curious formality and sense of occasion. The portrait of Eleanor McEvoy (2012), guitar in hand, echoes the emotional honesty of her songs, while the full-length image of revolutionary leader Fidel Castro (2012), clad in a red blanket, is reminiscent of a Station of the Cross in an Irish church. A religious sub-text can be read also in the cruciform format of the portrait of politician Noel Browne (1985), a radical reformer who was pilloried by conservatives in 1950’s Ireland. The cruciform motif is also present in the portrait of James Joyce (2011) expressing perhaps the writer’s ambivalent attitude towards his native country, one that combined, in equal measure, acceptance and rejection. The writer James Patrick Donleavy (2006) is also represented in this exhibition and an enquiry into the human psyche and the workings of society, is mirrored in the scientific research into the building material of life itself, the structure of DNA, by James D.  Watson (2009). For Ballagh, his portrait of his friend and artist Micheal Farrell (2003), painted following Farrell's death in 2000, stands as a reminder of Farrell's engagement through his art, of many of the social and political issues that Ballagh holds important, as he puts it, Farrell ‘was not afraid to rattle the cage of Irish society’.

Counter-posed with these seven portraits of cultural and political leaders are seven head and shoulders portraits of Ballagh himself, created in the recent past. They are unflinching self-portraits, revealing the hand of time and an inexorable transition from the prime of life into older age. These seven self portraits are full of Ballagh’s best qualities; an acute sense of the present moment, an unflinching honesty, a slightly mischievous sense of humour and a self-deprecation very much in keeping with his Dublin background*.

Accompanying the exhibition, a full-colour publication will be published with essays on the seven cultural and political portrait subjects by prominent figures including Theo Dorgan, Ciaran Carty, Declan Kiberd and Tony Benn. Peter Murray, Director of the Crawford Art Gallery provides an overview of the artist's career.

About the artist: Robert Ballagh
Born in Dublin in 1943, Robert Ballagh studied architecture and worked as an engineering draughtsman, a musician and a postman before taking up painting in 1967. He represented Ireland at the Paris Biennale in 1969.  Major survey exhibitions of his work have taken place in Lund, Warsaw, Sofia and Moscow.  In 2006, the RHA Gallery staged a career retrospective in Dublin.

As a graphic designer he has produced over seventy stamps for An Post and designed the Irish banknotes before the introduction of the euro. His notable work in the theatre includes Samuel Beckett's Endgame, Gate Theatre (1991); Steven Berkoff's production of Oscar Wilde's Salomé, Gate Theatre, Dublin (1998), the staging for the opening ceremony of the Special Olympics in Croke Park, Dublin (2003) and Riverdance.

For 10 years, Ballagh chaired the Irish National Congress, a non-party organisation working for peace in Northern Ireland, and he is currently president of the Ireland Institute, a centre for historical and cultural studies. He served as the first chairman of the Artists' Association of Ireland when it was founded in 1981, and he is a fellow of the World Academy of Art and Science.  Robert Ballagh is the founding chairman of the Irish Visual Artists Rights Organisation.

* Extract from essay by Peter Murray from Seven: Robert Ballagh (2013)

A selection of Robert Ballagh artworks from the Crawford Gallery collection can be seen here.