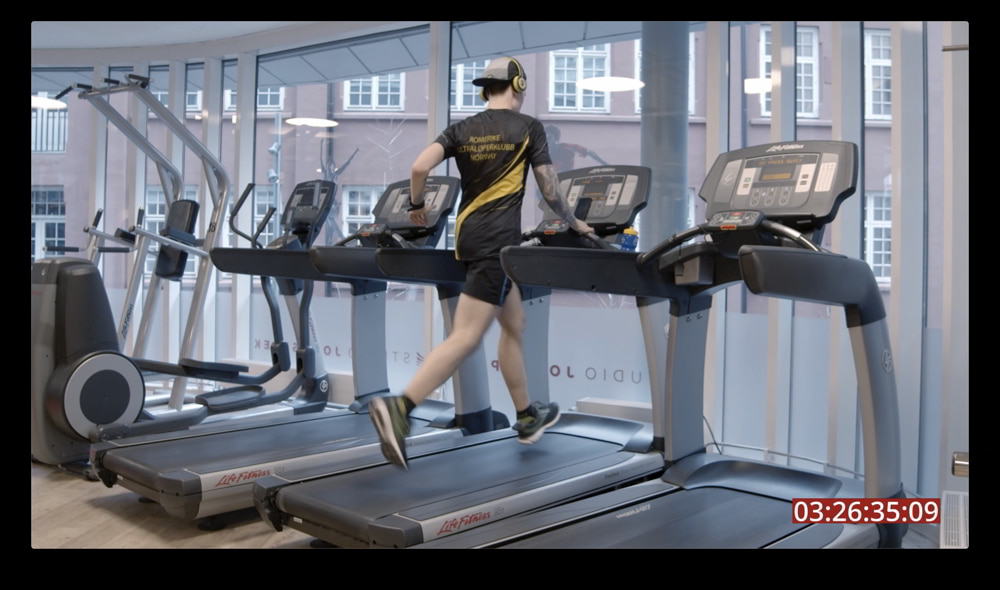 In 4_Runners (2021) by Mihály Stefanovicz, four ultrarunners on treadmills are staged in the gym or in private apartments throughout Norway. The static treadmill implies a post-modern theme where the use of soil - or running on the earth- is outdated. The runners move through space and time and different landscapes, with the treadmill wheel is perpetually turning without ever touching the ground, eliminating the notion

of a journey but seeking the euphoria of physical fatigue.

4_Runners was developed from the multichannel video installation Document_3,4,5,6 under the support and guidance of Tromsø Kunstforening, Norway.

Mihály Stefanovicz (b.1991, Hungary) is a visual artist, whose practise is predominantly based upon photo imagery and video work. After a short period spent in Munich (G) and Portsmouth (GB), in 2011 Mihály settled in The Hague (NL) for eight years, where he completed his bachelor degree at Royal Academy of Arts.  After graduation, he spent one year assisting Paul Kooiker in Amsterdam.

He was trained in the craft of traditional photography, focusing on studio photography. Subsequently Mihály began to experiment with an action-based approach: He had engaged in a walking performance for a month, - took repetitive portraits of himself in a photo booth daily for three months, - kept taking pictures of passing aeroplanes with his phone for a year. Eventually, he reduced the camera to be solely a tool of documentation. The act of repetition became the central element of his practice. Later on, he turned towards appropriated imagery, which still is a substantial part of his work. In August 2016 he attended the artist in residence program of Listastofan Art Space in Reykjavik.

In the 2019 Mihály moved to Norway, where his focus shifted from static images to video work. Without prior experience in this medium, which he considers an advantage, he has started to produce uncut footage, that is shot in- and represents "real-time".