Jasmina Cibic - THE NATION LOVES IT 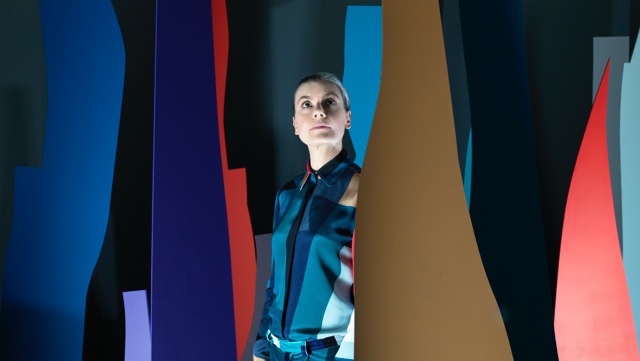 Jasmina Cibic (b. Ljubljana 1979, based in London) works in performance, installation and film, employing a range of activity, media and theatrical tactics to redefine or reconsider the currency and formats of national representation. Cibic re-envisions nationally representative architecture and art as props and framing devices that nation states and political bodies use when they assert control and enact protocol rituals.

The film The Nation Loves It explores the role of architecture as an agent of political rhetoric through a single character whose speech is an amalgam of the words of global public figures scripted from a myriad of political speeches. These redacted proclamations were originally made by politically engaged figures who invested in architecture's relationship to national identity on an international stage. Cibic invited the artist Tim Etchells to contribute to the project reworking a selection of speeches on new nationally and ideologically endorsed architectural projects into a single monologue.

His text “Starting” served as the base for the films script which was performed by Cathy Naden. Itemphasizes politicians use of key words which vary from the pastiche to the zealous, whilst other excerpts demonstrate the weight of social-political expectation of metaphorically constructing a nation through the physical construction of a building.

Jasmina Cibic's work draws a parallel between the construction of national culture and its use value for political aims, encouraging the viewer to consider the timelessness of psychological and soft power mechanisms that are utilised by individuals and political powers for their own reinsertion and reinvention.

The film, perhaps, has particular resonance as Ireland moves forward from recession and enters a renewed expansion of new building projects and economic growth – will we learn from the past or be swayed again by political and capital rhetoric?