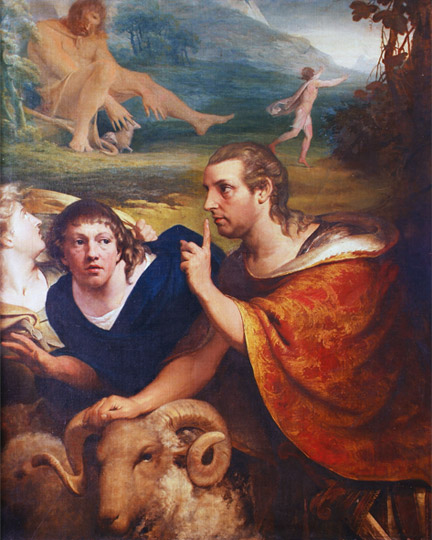 Portraits of Barry and Burke in the Characters of Ulysses and his Companion fleeing from the Cave of Polyphemus c.1776 Oil on canvas 127 x 102 cm

A major exhibition celebrating the work of the most significant artist to have been born and trained in Cork will be held at the Crawford Municipal Art Gallery in October 2005 in partnership with Cork 2005 and The Bowen Group.

The exhibition will be a timely opportunity to re-examine and assess James Barry’s contribution to both the history of art and the history of his own times. Through his writing and lectures, as well was through his art, Barry expressed a belief in the advancement of human civilization through education and political liberty, beliefs which amounted to heresy for many in eighteenth century Britain. Infamously, he was the only member ever expelled from the Royal Academy and his controversial views were considered a threat to the political and artistic status quo, despite, ironically, his own hopes of securing royal patronage. James Barry’s allegorical works, particularly his mural paintings in the Royal Society of Arts in London (1777-1805), which will be recreated in the Sculpture Gallery, reflect the history and politics of his own times, and give a crucial insight to this extraordinary stubborn, intractable and intelligent man.

James Barry is now regarded as perhaps the most important Neo-classical painter of eighteenth century Britain this extensive collection of Barry’s paintings and engraving will be on show for five months from October 22 2005 to March 4 2006 culminating in a three-day conference in which leading international academics will reappraise James Barry’s work. The conference will coincide with the two hundredth anniversary of James Barry’s death.

Exploring his life and work the James Barry exhibition will be an exciting finale to the celebration of Cork’s tenure as European City of Culture.