In Search of the Miraculous: ten days of film, video and photography 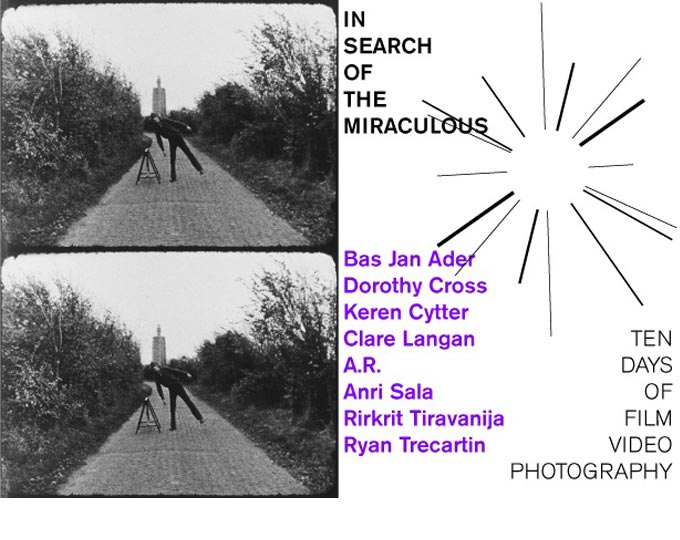 In Search of the Miraculous:
ten days of film, video and photography

The exhibition takes its title from an unfinished multi-part project by iconic Dutch-born conceptual artist Bas Jan Ader. In Search of the Miraculous, the artist’s last piece of work, was intended as a three-part performance. It began with a lonely night-time walk from the hills of Los Angeles down to the sea documented in photographs (One Night in Los Angeles, 1973) and led to the second part In Search of the Miraculous (Songs of the North Atlantic), an attempted west-east crossing of the Atlantic in July 1975 in a small four-metre cruiser from which he never returned. Six months after Ader’s departure, his boat was found half-submerged off the coast of Ireland.

In Search of the Miraculous: ten days of film, video and photography showcases recent work by Irish and international artists involved with the moving image and photography alongside a key film work from Bas Jan Ader’s 1971 Fall series, Broken Fall (Geometric). In doing so, it sets up a dialogue around what has been a central theme of Ader’s life and work: “[framing] a key motif from the culture of Romanticism, that of the wandering tragic hero on a quest for the sublime”.1

Nowhere, perhaps, does Ader more vividly portray that theme and the inherent tension it carries than in the piece presented here, which shows the artist experiencing the act of falling in a part-tragic part-slapstick mode. Indeed, Broken Fall (Geometric) brings to life two crucial aspects of the sublime: the particular ‘limit’ or threshold experience where one teeters on the edge, the self both revealed and dissolved in a state of heightened awareness, as well as – and this is intrinsic to Bas Jan Ader’s project – the fragility of this state and ultimately the possibility of failure.

The works presented in this exhibition all share Ader’s physical and emotional exploration of these glimpses of the miraculous within our world — when the miraculous irrupts into the everyday and when everything comes together momentarily, producing an excess of meaning. All the artists surrender to these interpretations of the miraculous, and crucially they evoke a shared sensibility of the emotions and events which are part of everyday life but which are also extraordinary and universal. Seen in this light, the artists in this exhibition ‘could be said to be translating and transforming […] emotion […] into an aesthetic form, a cultural concept and finally, an idea.’2

In different ways, they all peek into these moments where space and time seem as though suspended, in the powerful and poetic works of artists such as Dorothy Cross and Clare Langan. Where time is slowed down to the point of meditation in Rirkrit Tiravanija’s eight hour-long video work Lung Neaw, or near slow motion in Ader’s film work. Or conversely, where it frenetically speeds up, with visual overload in the works of Ryan Trecartin and Keren Cytter altering our senses and perception. As such, they all share in Ader’s personal and artistic quest for the sublime.