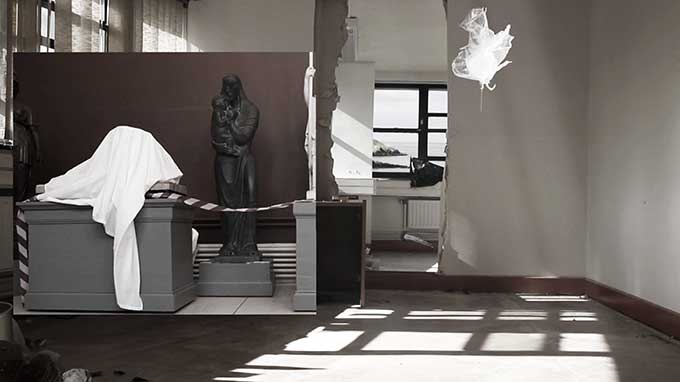 Ailbhe Ní Bhriain’s mesmeric series of films Great Good Places (2011) is presented at the Crawford Art Gallery to coincide with Recasting Canova which celebrates the bicentenary of the Canova Casts, the prestigious gift that forms the basis of the gallery’s collection.

Borrowing its title from the Henry James short story ‘The Great Good Place’ this series of films draws on the slippage between dream and reality captured in the story and its strange atmosphere - at once mundane and hallucinatory. James’s Great Good Place is an impossible but obscurely familiar refuge to which the overworked and the overwhelmed find themselves magically transported. Ní Bhriain reimagines a series of generic settings and specific locations including the Crawford Art Gallery’s Sculpture Galleries as such sites of suspension and displacement.  Using a combination of simple collage devices and computer generated imagery, she constructs new hybrid-places; these draw on an odd, associative logic to interrupt our ready-made relationship with certain archetypal locations and remind us of the essential make-believe of representation. In a sense this work proposes the image itself as a Great Good Place - a displaced elsewhere and an imaginative escape.