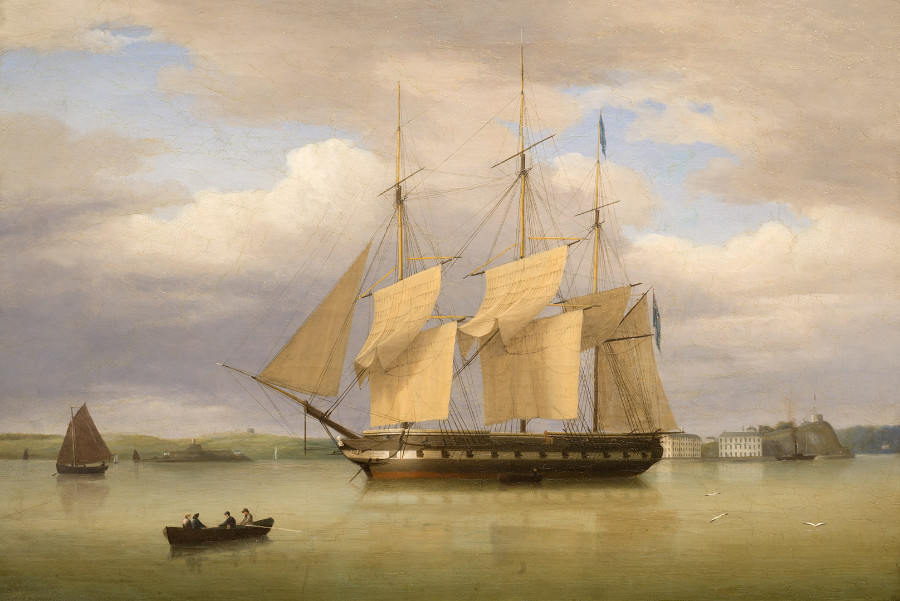 Ship ahoy! We’re delving into some harbour history with this WORK OF THE WEEK.

Naval Frigate Off Haulbowline (c.1845) is an oil painting by George Mounsey Wheatley Atkinson that depicts some recognisable features of Cork Harbour.

As with several other paintings by the artist, in the background of this placid scene is the island of Haulbowline, which has been first fortified since 1602, after which time Cork Harbour grew in strategic importance, as did its defences. A network of fortifications was built in the harbour’s mouth at Camden (Meagher) and Carlisle (Davis), its centre at Spike Island (Mitchell) and Haulbowline, and Martello Towers (1811-13) at Ringaskiddy, Haulbowline, Fota, Belvelly, and Rosleague.

This identifiable infrastructure in Atkinson’s painting, paired with the presence of a naval frigate, underscore the importance at the time of Cork Harbour’s position as a key western defensive and provisioning port of the British Empire. Indeed, it was retained by the United Kingdom from 1921 until 1938 as one of the so-called ‘Treaty Ports’. Haulbowline is now home to the Irish Naval Service (An tSeirbhís Chabhlaigh).

When viewing this work, it is also worth noting the year in which it is believed to have been painted: 1845 marked the start of An Gorta Mór (Great Irish Famine), during which one million people died and another one million emigrated, many departing from Cork Harbour.

George Mounsey Wheatley Atkinson (1806-1884) was a self-taught painter who hailed from Cove (Cobh), County Cork. Initially an apprentice ship’s carpenter, he later returned to land and became Government Surveyor of Shipping and Emigration.