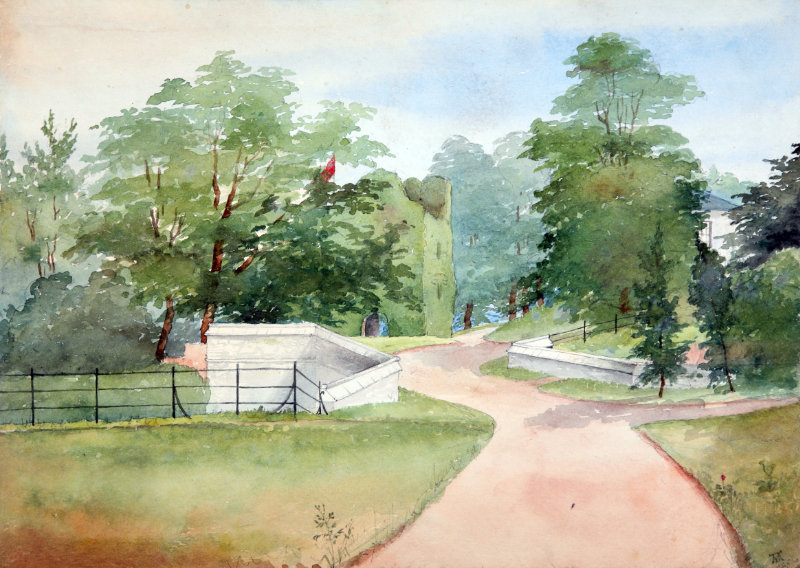 This WORK OF THE WEEK is a slice of summer abundance!

Dundanion, View from the West (1860) by Susanna Adelaide Deane depicts the rustic, informal gardens that surrounded the artist’s family home in the 1860s.

This landscaping style owed much to changes in the preceding century, with the relative symmetry of the French formal garden having given way to the English landscape garden made popular by Lancelot ‘Capability’ Brown.

Although such gardens of the wealthy classes were often designed for leisure and to exclude the outside world, Dundanion is perhaps unusual given that a railway once cut through its western verges. The limestone parapet of a railway bridge is at the centre of this watercolour. Located in the Cork suburb of Blackrock, the trains may have long since ceased but their former route has been transformed into a public greenway.

In the middle background of Deane’s watercolour stands the romantic, ivy-clad ruin of Dundanion Castle. This was built c.1564 by the Galwey family and, over a century later, may have been the point from which William Penn, founder of Pennsylvania, departed for North America. Today, the bank of the River Lee is further from the castle than in earlier times.

Susanna Adelaide ‘Ada’ Deane (1837-1919) was the daughter of Elizabeth ‘Eliza’ O’Callaghan Newenham and architect Sir Thomas Deane. Among her siblings were fellow artist Olivia Louise Deane and architect Sir Thomas Newenham Deane. Although not much is known of her adult life, as a child Ada sat for her portrait by artist Edward J. Harding alongside her mother and sister.

Dundanion, View from the West (1860) by Susanna Adelaide Deane is featured in BOTANICA: The Art of Plants (Floor 1) until 25 September 2022.