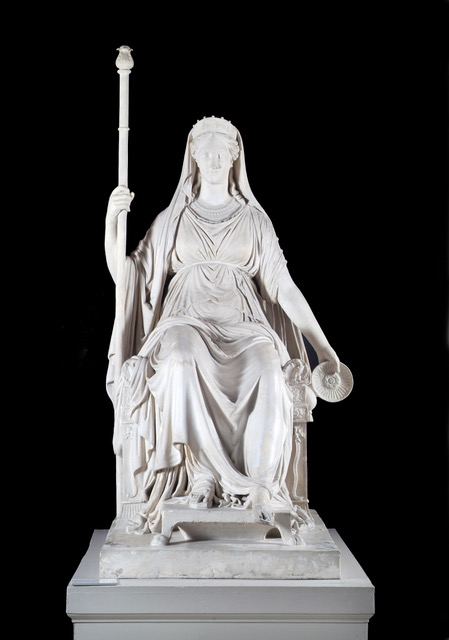 The Goddess Concordia (c.1816) by Antonio Canova follows the ancient tradition of female personifications, still popular in the eighteenth and nineteenth centuries. Seated with sceptre (imperial staff), diadem (tiara), and patera (dish), the goddess represents agreement or harmony, whether social or political. Her throne also includes references to the Roman eagle (aquila), perhaps an alusion to the artist’s intention to transform this work into an Imperial portrait.

Similar to Canova’s portrait of Marie Louise of Habsburg as Concordia (c.1811-14), in the collection of Galleria Nazionale di Parma, our plaster sculpture differs significantly in the face and other less noticeable details. It is therefore more closely aligned with the artist’s original plaster model (1809-10) – part of the Museo Canova collection – a sort of studio prototype from which it is derived.

Antonio Canova (1757-1822) was the leading Neoclassical sculptor of his generation and an international superstar two centuries ago. Known for his grand classical subjects and elegant portraits, particularly of Napoleon’s extended family, he also acted as a diplomat on behalf of the papacy. In 1816, he was commissioned by Pope Pius VII to oversee the creation of a significant diplomatic gift: The Canova Casts. These storied objects would eventually make their way to Cork, via London, and have formed the basis of our collection for two hundred years.

The Goddess Concordia (c.1816), currently featured in the exhibition RECASTING CANOVA, recently became the 16,000th object to be added to Scan the World, a community-built archive of 3D printable sculpture and cultural artefacts.