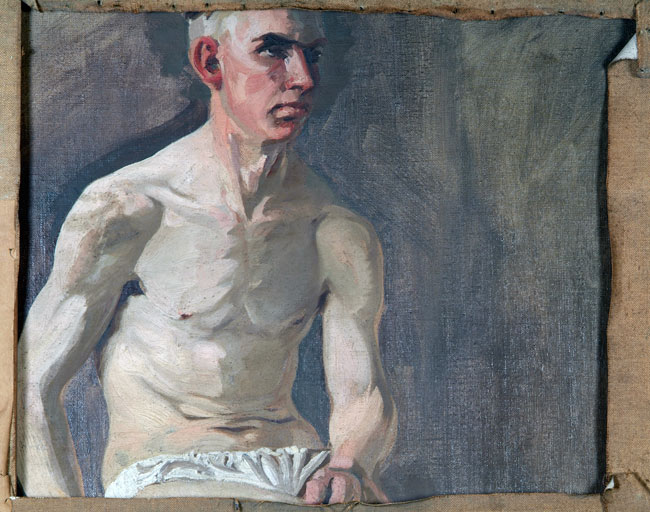 This WORK OF THE WEEK is back-to-front and upside-down!

When purchasing a work entitled Faiche Laighean (Leinster Lawn) in 1947, our Gibson Bequest Committee may not have expected a ‘two for one’ deal.

On inspection, however, it was discovered that the artist had reused her canvas. Ganly’s placid, colourful view from outside the National Gallery of Ireland and across Leinster Lawn towards Government Buildings is painted on the back of another, very different work.

In Torso of a Seated Man, the model’s semi-nudity reveals tan lines from the neck up and wrists down. Who was this man?

The reasons for reusing a canvas vary, but it may be that the artist was dissatisfied with the initial painting or was simply economical with her materials. Although it is not unusual for an artist to reuse another artist’s canvas, in this instance it seems likely that Ganly painted both works herself. For the purposes of our new exhibition, BEHIND THE SCENES, the reverse of the canvas has been put on display.

Brigid Ganly (1909-2002), daughter of Mabel Emmeline Smyly and artist Dermod O’Brien, grew up in County Limerick, before her family moved to Fitzwilliam Square, Dublin. She studied at both the Dublin Metropolitan School of Art and Royal Hibernian Academy, and won the Taylor Scholarship in 1929 for Pity, an allegorical male nude. She often exhibited with her sister-in-law, and fellow artist, Kitty Wilmer O’Brien (1910-1982).

Torso of a Seated Man (c.1947) by Brigid Ganly is currently featured in BEHIND THE SCENES: Collection at Work.