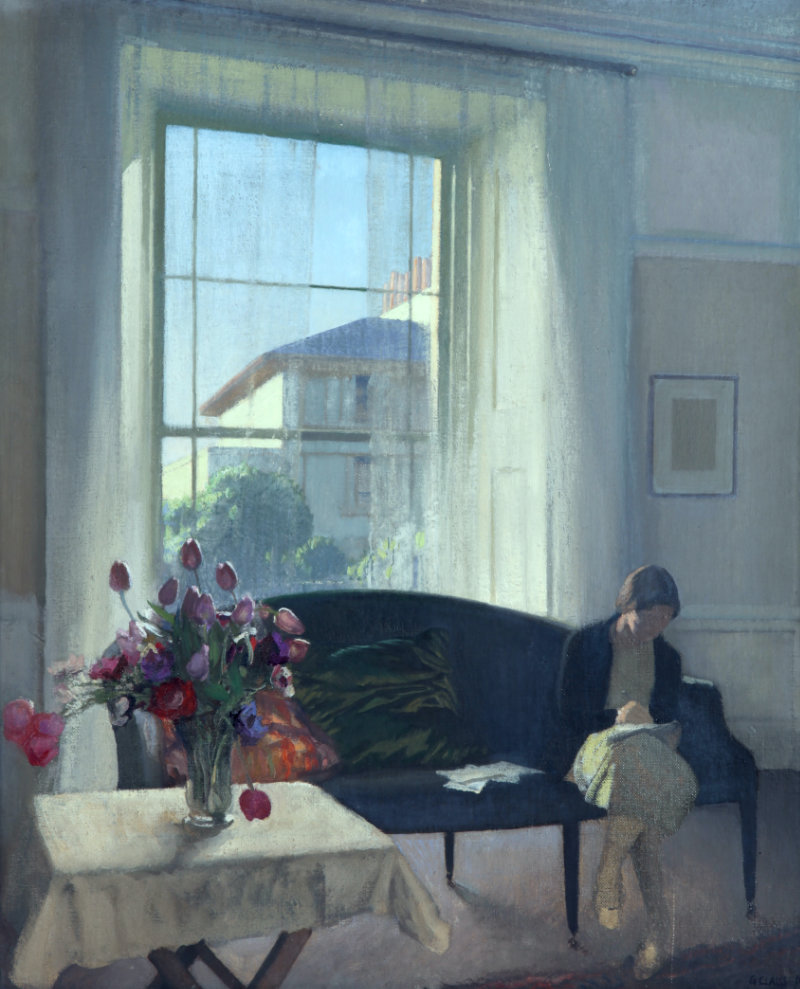 The Quiet Room (1928) by George Clausen captures a moment of stillness in a large, light-filled interior.

This is an affluent home – probably in St John’s Wood, near Regent’s Park, London – and is occupied by a solitary, seated female figure who appears to be writing. It is tempting to align this scene with the contemporaneous A Room of One’s Own (1929), in which Virginia Woolf considered that ‘a woman must have money and a room of her own if she is to write fiction.’

Balancing the woman’s form in Clausen’s painting is a vase of unruly tulips which may contribute to our understanding of the woman’s thoughts. Floral design – or flower arranging – is an artform that often relies upon careful composition of colour and form to achieve balance, rhythm, and unity. The tulips in this painting, however, contrast with the woman’s contained form and reach, even strain in different directions.

George Clausen (1852-1944) was a noted English artist who had studied under the academic painter William-Adolphe Bouguereau in Paris. An admirer of Johannes Vermeer, he was a founding member of the New English Art Club, Professor of Painting at the Royal Academy (1904-6), and Master of the Art Workers’ Guild (1909). Clausen was knighted in the year prior to painting The Quiet Room, which represents a return to familiar subject matter for the artist, who had created similar compositions over the preceding two decades.

The Quiet Room (1928) by George Clausen is featured in BOTANICA: The Art of Plants (Floor 1) until 25 September.