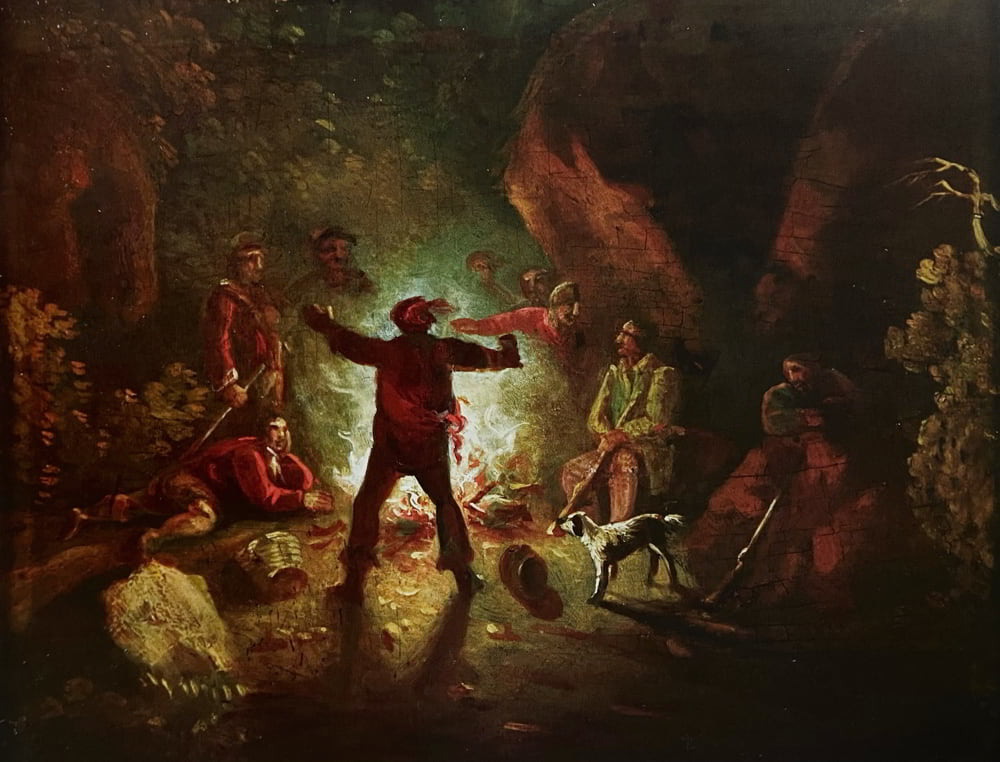 Banditti around a campfire (c.1796) is a small, yet atmospheric oil painting attributed to Nathaniel Grogan.

Several armed figures and a dog are depicted in this nocturnal scene set within the embrace of trees and large rockfaces. These brigands are gathered around a bright campfire and one of their number, silhouetted by the flames, commands attention and casts a long shadow. Such images with uncertain narratives were highly suggestive to audiences of the time, provoking anxiety and the thrill of fear. What tales of terror might be told!

Previously attributed to William Sadler (c.1782-1839) and titled Revolutionaries, this painting may have found inspiration in Ann Radcliffe’s popular gothic novel, The Mysteries of Udolpho (1794), which features a scene of ‘banditti’ in the Pyrenees. In turn, the painting has featured in the film A Moment Twice Lived (2016) by Martin Healy, which is also in the collection.

Nathaniel Grogan (1740-1807) was the son of a woodturner and contemporary of fellow artist James Barry (1741-1806). Although believed to have been taught by the landscape painter John Butts (1728-1764), Grogan was nonetheless discouraged from a career in painting by his father. He enlisted in the British Army and served in the West Indies and North America (during the War of Independence) before returning to his native Cork where he became known for his genre scenes, landscapes, and house decoration. The artist’s interior paintings for Vernon Mount were destroyed by fire in 2016.

His son, who was also a painter, is known as Nathaniel Grogan the Younger.

Banditti around a campfire (c.1796) by Nathaniel Grogan is displayed in our historic Penrose Rooms (Floor 1).