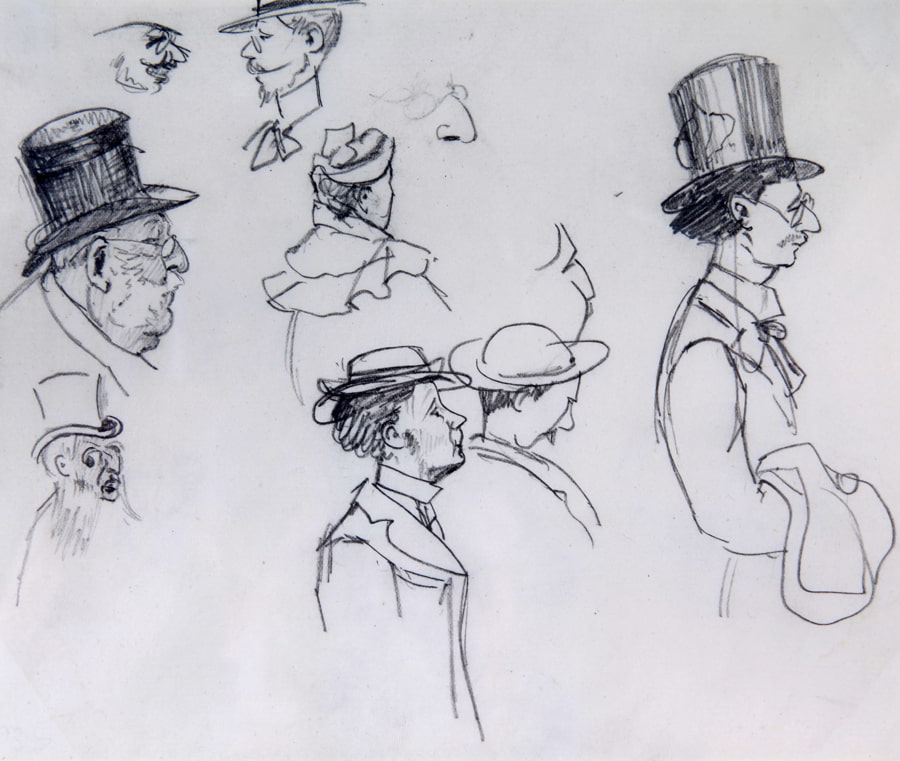 Character Sketches (c.1890) is a wonderful example of Edith Somerville’s keen observational skills. Verging on a series of caricatures, this small work in pencil depicts several figures in profile, each of whom is expressive of a particular personality or character.

While attending art classes in Paris, the artist had “developed a remarkable talent for rapid, sidelong sketching,” according to Gifford Lewis. As drawing anyone but the studio model was strictly forbidden, Somerville learned “to sketch, sideways, without being caught.”

Astute and witty, the figures in this study are perhaps much like the characters that populated the books she had begun to publish with Violet Martin – as Somerville & Ross – in this period. By then, Somerville had already published her first illustrated article – ‘An “atelier des dames”’ – in The Magazine of Art, and would go on to contribute to Art Journal, Graphic, and Lady’s Pictorial. Of the latter, Anne Jamison has noted that, in the final publication, “all of Somerville’s illustrations were modified by an in-house artist … Somerville complained (to no avail) that the finished illustrations were ‘simply intolerable.’”

Edith Somerville (1858-1949) and Violet Martin (1862-1915) enjoyed popular success with their books, including The Real Charlotte (1894) and Some Experiences of an Irish R.M. (1899). Speaking with her biographer Geraldine Cummins in 1947, however, Somerville expressed her wish to have given “a great deal more time to painting and a great deal less to hunting … She wanted above all else to be a great painter.”