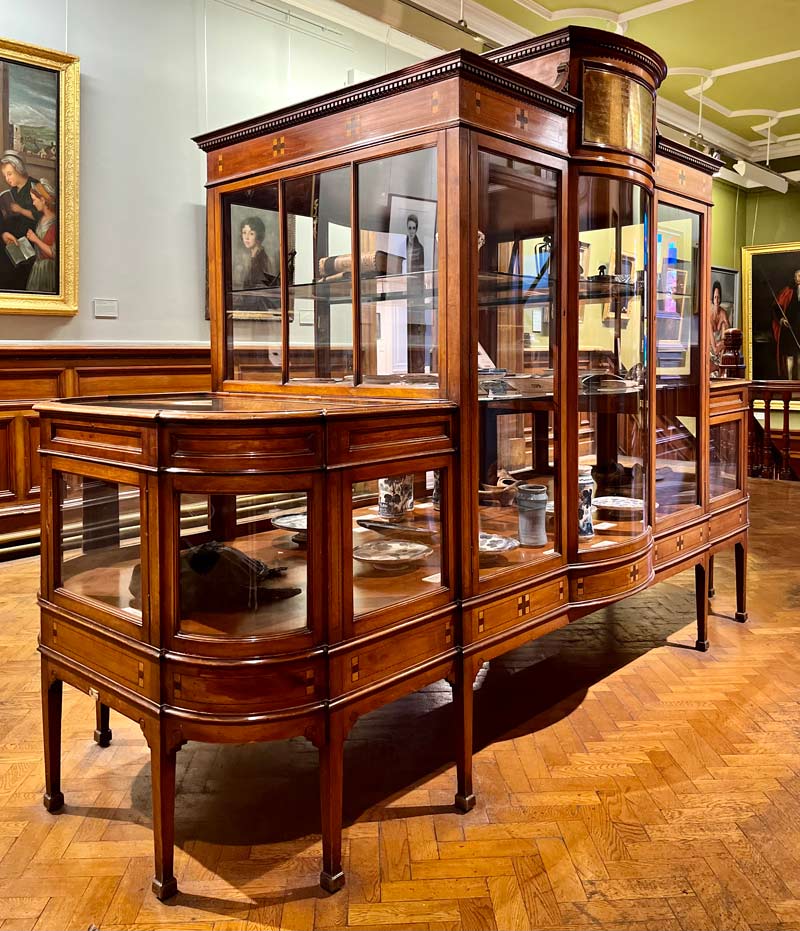 As we prepare to bid a temporary farewell to it, to facilitate a new exhibition, a familiar fixture in the gallery is this WORK OF THE WEEK!

The Gibson Cabinet has long been a mainstay at the heart of the gallery. It is dedicated to the memory of our benefactor, Joseph Stafford Gibson (1837-1919), and was commissioned, according to his wish, to display his personal collection of objet d’art.

On 13 February 1922, the Gibson Bequest Committee approved the design for a ‘glass case’ by architect Daniel Levie of Chillingworth & Levie. Its manufacture was subsequently offered for tender, with the commission ultimately being secured by Robertson, Ledlie, Ferguson & Co. Ltd., who were then proprietors of the Munster Arcade, Cork.

The resulting cabinet bears a Déanta i nÉirinn (Made in Ireland) trademark and two brass plaques. On 2 December 1922, James Archer (1871-1946) was entrusted with engraving the inscriptions – one in English and one as Gaeilge – the text of which had been composed by Arthur Frederick Sharman-Crawford (1862-1943).

The architectural partnership Chillingworth & Levie was formed around 1911 by Daniel Levie (1875-1963) and Robert Chillingworth (1878-1916). Following the latter’s early death from tuberculosis, Levie continued to operate the practice, taking on a new partner, John E. Wilkinson, in 1929.

Over the coming weeks, the Gibson Cabinet and its displays will be carefully dismantled by experts and placed into temporary storage to make way for our exciting new exhibition, CORBAN WALKER: As Far As I Can See (15 October – 15 January).

Listen back to Conor Tallon and Michael Waldron discussing this WORK OF THE WEEK on The Arts House (Cork’s 96fm and C103).