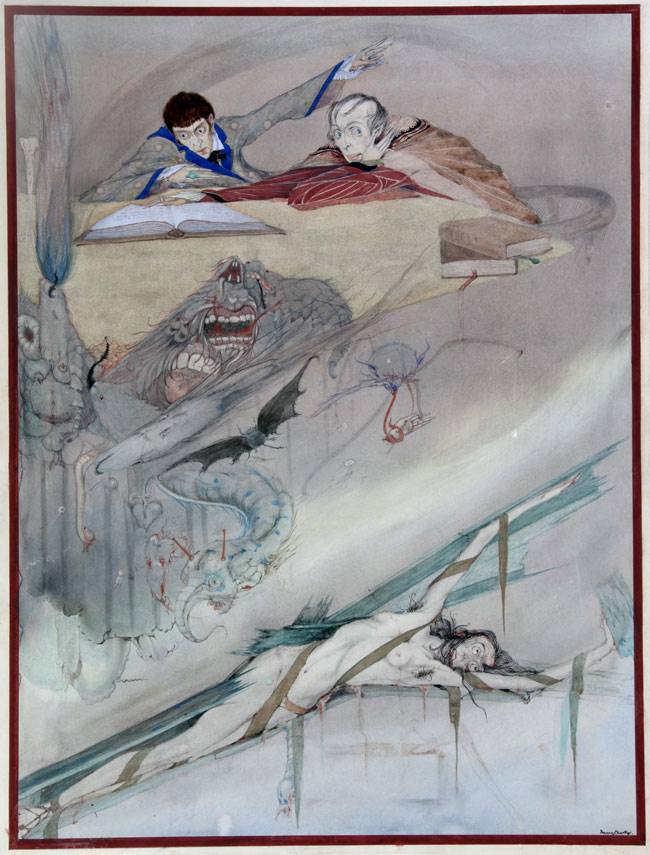 We’re taking a spooky start to the year with The Fall of the House of Usher (1923) by Harry Clarke.

This pencil and watercolour illustration is inspired by the unnerving, grotesque, and bodily imagery of Edgar Allan Poe’s classic tale “The Fall of the House of Usher” (1839).

At the top of the illustration, Clarke depicts the story’s narrator reading by candlelight with his friend, Roderick Usher. The artist selects the moment in which the two men become aware of sounds made by Roderick’s entombed – yet still living! – sister Madeline Usher, who appears at the bottom of the illustration.

Fun fact: on its reverse, Clarke has not only signed and dated this colour illustration but also isolated the source quotation: ‘yes, I hear it, and have heard it. Long—long—long—many minutes, many hours, many days, have I heard it.’

Clarke – who died in Chur, Switzerland on 6 January 1931 (Epiphany) – was a master storyteller in both stained glass and book illustration. He often drew on literary sources, transforming them through his own extraordinary imagination and skills of draughtsmanship. This work is one of his original illustrations for the colour plates included in George G. Harrap’s edition of Poe’s Tales of Mystery & Imagination (1923).

One hundred years old in 2023, this work still possesses the artist’s dark and sinister intention. Clarke straddles two worlds – one of waking reality and the other of nightmarish and supernatural visions – and powerfully conjures visually what Poe had set down in words.

The Fall of the House of Usher (1923) is featured in OTHER WORLDS: Harry Clarke Watercolours until 19 March.

Tune in to The Arts House on Cork’s 96FM and C103 Cork every Sunday morning as Conor Tallon chats with curator Michael Waldron about a work from the collection!