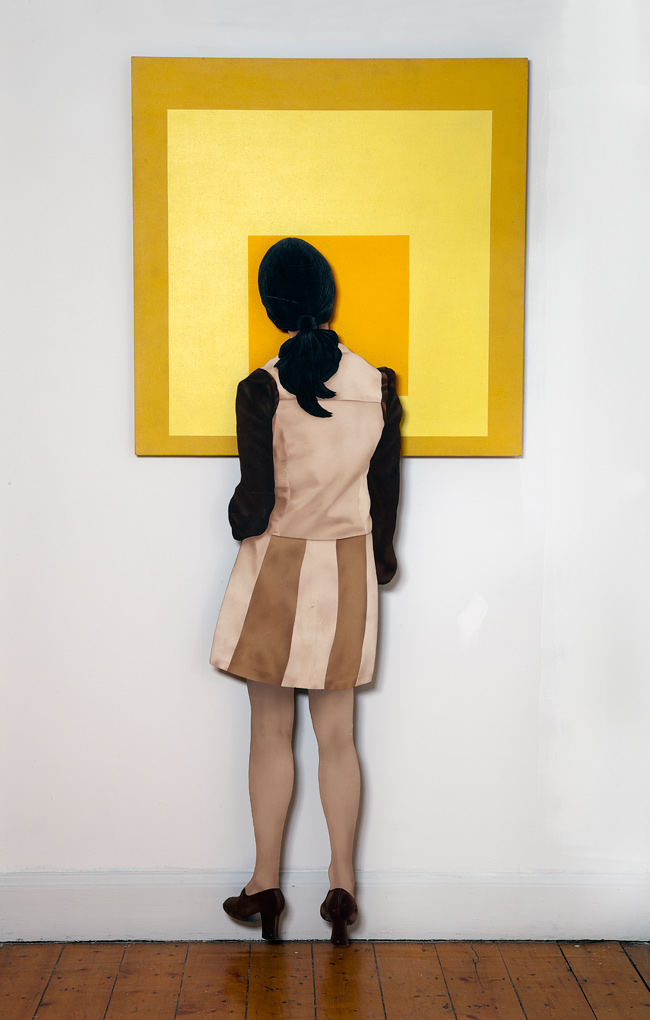 Cut-out with a Joseph Albers (c.1974) by Robert Ballagh is a surprising, yet inviting encounter in the gallery as it echoes the visitor’s own stance.

Ballagh’s use of the cut-out element came as he continued to introduce the figure into his (previously more abstract) work.

Selected for inclusion in his current exhibition – AS FAR AS I CAN SEE – fellow artist Corban Walker notes that Ballagh’s work from that time ‘was so contemporary and fresh with vitality. His paintings of people in front of paintings by some of the figureheads of the 20th century are stimulating and curious.’

In this work, Ballagh places the cut-out of a woman in front of a painting by Josef Albers (1888-1976). The influential artist and educator associated with the Bauhaus and Black Mountain College was noted for his geometric abstraction and colour studies, and had exhibited in ROSC ’71 in Dublin.

‘In this painting,’ Walker continues, ‘he also demonstrates how Joseph Albers is aligned to my perception of scale, particularly how he employs colour to define space.’

Robert Ballagh (b.1943) is an artist and designer known for the set of Riverdance, numerous postage stamps, and the last series of Irish banknotes (Series C). He is a member of Aosdána and, in 2018, published A Reluctant Memoir.

Cut-out with a Joseph Albers (c.1974) by Robert Ballagh is featured in AS FAR AS I CAN SEE until 15 January.

It is one of two works by the artist presenting on display, with The Rape of the Sabines after David (1969-70) is featured in BEHIND THE SCENES: Collection at Work.

Tune in to The Arts House on Cork’s 96FM and C103 Cork every Sunday morning as Conor Tallon chats with curator Michael Waldron about a work from the collection!