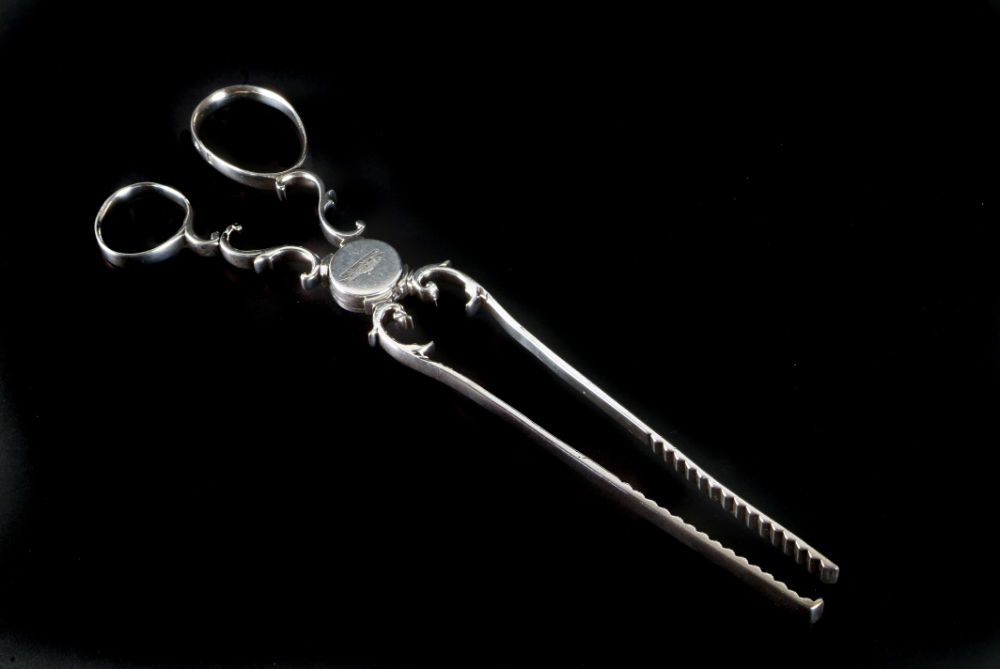 For the final entry in the current series, this WORK OF THE WEEK is all about Asparagus Season!

If you were well-to-do during the long reign of King George III (1760-1820), then you may have had in your possession some elegant – yet niche – silverware, such as Asparagus Tongs (c.1800). These serving utensils not only reflect wealth and status, but also tell us about the dietary habits of prosperous people some 250 years ago!

In the mid eighteenth century, for instance, an Irish gentleman travelling to Liverpool wrote that he had “a very good supper, consisting of veal cutlets, pigeons, asparagus, lamb and salad, apple-pie and tarts” (Narrative of the journey of an Irish gentleman through England in the year 1752).

Measuring 39 centimetres in length and resembling elaborate scissors, these silver tongs weigh 4 ounces and are the work of Dublin silversmith John Power (fl.1792-1819). At their pivot (or joint) they bear two bright-cut engravings: denoting its purpose, on one side is a sheaf of asparagus while, on the other, is a fish which relates to the Penrose family crest.

Although their origins were at Loe Pool in Cornwall, the Penroses were Quakers who had established themselves in Cork and become exceptionally wealthy by the second half of the eighteenth century. At that time, Cork and Dublin were home to numerous families of silversmiths, including the Bucks, Gibsons, and Nicholsons. As such, a well-made and elegant Asparagus Tongs was the perfect addition to a fine dining table!

Asparagus Tongs (c.1800) by John Power is displayed in our historic Penrose Rooms (Floor 1) as part of our ongoing GEORGIAN IRELAND exhibition.

Tune in to The Arts House with Elmarie Mawe on Cork’s 96FM and C103 Cork every Sunday morning as Conor Tallon chats with assistant curator Michael Waldron about a work from the collection!