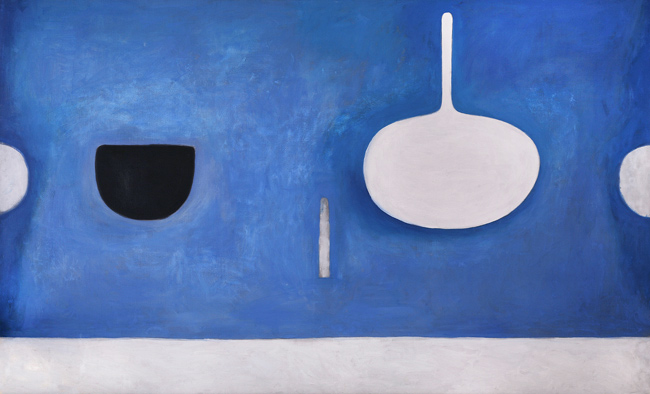 Blue Still Life with Knife (1971) by William Scott is among more than thirty collection works selected by Corban Walker for inclusion in his current exhibition, AS FAR AS I CAN SEE.

Walker considers Scott to have been ‘a genius interpreter of the simple and the ordinary.’

And this is immediately apparent when we consider Scott’s take on the seemingly banal still life. Distilling such objects as bowls and cutlery to their most basic forms, Blue Still Life with Knife re-energises the genre for a contemporary world through a simplified palette of blue, black, and white, and – measuring nearly two metres wide – at monumental scale.

In 1958, William Scott (1913-1989) was among the artists to represent Britain at the Venice Biennale. Of his childhood in Enniskillen, County Fermanagh, he would reflect that ‘I was brought up in a grey world, an austere world, the garden I knew was a cemetery and we had no fine furniture. The objects I painted were the symbols of the life I knew best.’

Did You Know: This painting is one of 39 artworks that were presented to the State in 2012 as part of the AIB Art Collection.

Blue Still Life with Knife (1971) by William Scott is featured in AS FAR AS I CAN SEE until 15 January.