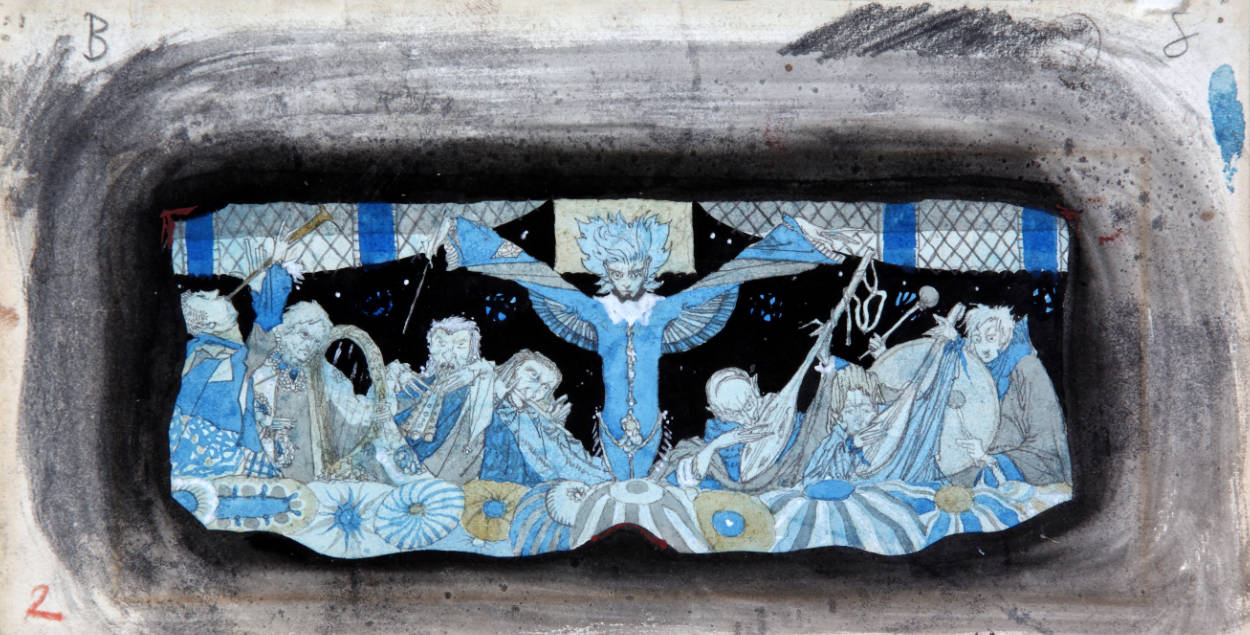 Strike up the band! This WORK OF THE WEEK is a real winter warmer.

Soon, up Aloft, the Silver, Snarling Trumpets 'gan to Chide (c.1923) by Harry Clarke gives us the best seat in the house, as we are placed front and centre before the artist’s strange septet or musical ensemble.

This watercolour study is dominated by the dramatic figure of the conductor of this not-quite orchestra. Rather than remaining faithful to his poetic source – “The Eve of St Agnes” (1819) by John Keats, in which angelic decorations are described ‘with hair blown back’ – Clarke has instead incorporated the image into the conductor’s appearance.

Occupying a gallery space, the musical ensemble contributes to the Eve of St Agnes festivities, which are detailed in an associated watercolour study. Each figure has its own personality sketched out and evoked by the artist.

Nicola Gordon-Bowe (1948-2018), the late great Clarke scholar, has suggested a source for the theorbo (long-necked lute) or sitar-playing figure to the right of the conductor: his balding head and pointed ears resemble the vampiric Count Orlok from F.W. Murnau’s contemporaneous silent film Nosferatu (1922)!

Harry Clarke (1889-1931), one or Ireland’s most renowned illustrators and stained-glass artists, loved literature and music. At the time of making this watercolour study in 1923, he attended a Franz Liszt recital given by Tilly Fleischmann at the Abbey Theatre.

Find out this and more in our new online exhibition HARRY CLARKE MARGINALIA, which runs until 14 February 2021.