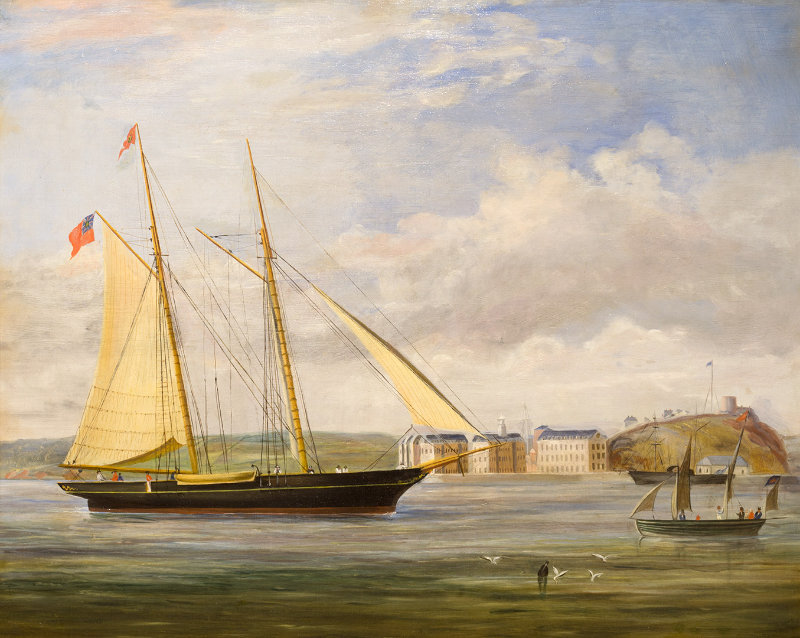 We’re celebrating Volvo Cork Week with this WORK OF THE WEEK!

Racing Schooner Crossing the Line at Whitepoint (c.1865) by George Mounsey Wheatley Atkinson is new to the collection, having been donated last year as part of the Port of Cork Collection.

In the painting, Atkinson depicts a schooner crossing the line at Whitepoint, Great Island during a sailing race. In 1851, a gaff schooner named America had won the Royal Yacht Squadron’s race of 53 miles around the Isle of Wight and ultimately gave its name to that regatta: the America’s Cup.

The most prominent regatta held in the Cork Harbour is, of course, the aptly-named Cork Week which this year takes place between 11 and 15 July. Wishing all participants fair winds and following seas!

Did you know? In 1720, the Water Club of the Harbour of Cork was founded at Haulbowline Island, which is clearly visible in the background of this painting. Aged 302 years, and now known as the Royal Cork Yacht Club (RCYC), it is the oldest established institution of its kind in the world. The schooner in Atkinson’s painting flies RCYC’s red burgee (triangular pendance).

Racing Schooner Crossing the Line at Whitepoint (c.1865) by George Mounsey Wheatley Atkinson is featured in THE PORT OF CORK COLLECTION (Floor 2) until 18 August.