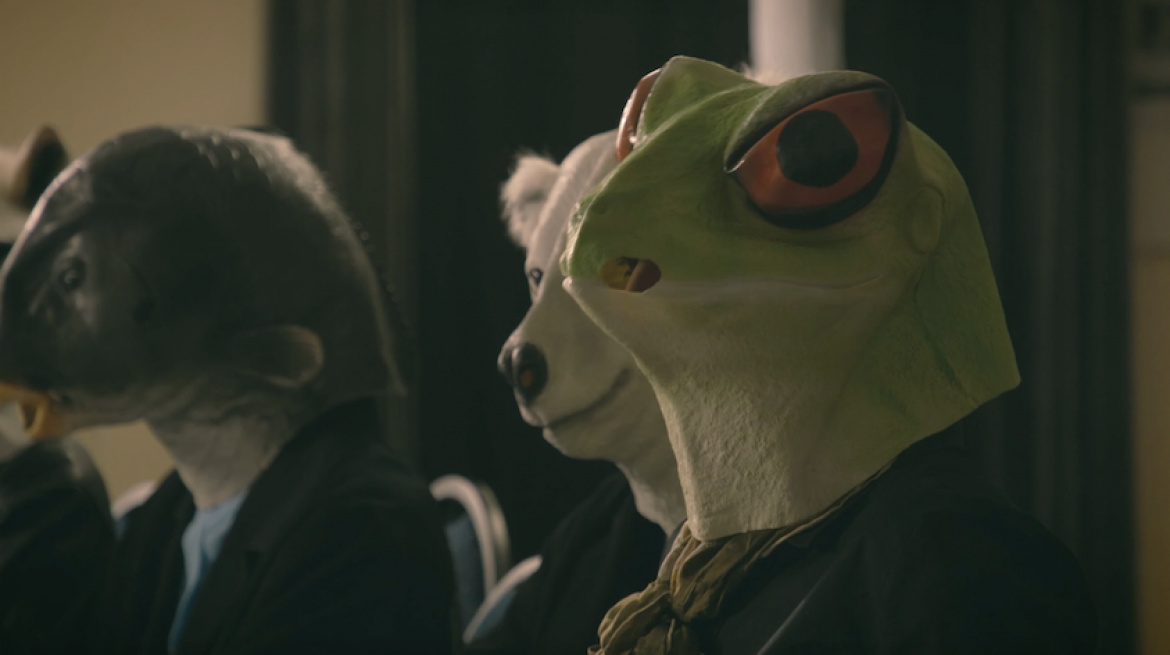 Dada, Górna and Jakubowicz’s film references the 2001 American production entitled “Conspiracy” [distributed in Poland with the Polish title reading: „Ostateczne rozwiązanie”, literally translated as ‘final solution’]. The American film is based on archival protocols documenting the Wansee Conference (held 20 January, 1942), where a group of senior Nazi officials gathered to ‘resolve the Jewish question’. During the conference, the Nazis make the tragic decision to mass-exterminate Jews with the use of gas chambers.

The film refers to the aesthetics and drama of the original, but takes on an entirely different issue: the legitimacy of human existence as a species in the eyes of animals. As part of the narrative, animals plot to take revenge on their enemies.

Various representatives of the animal kingdom act as judges and provide an extensive list of arguments against the harmful activities of homo sapiens. Different issues that have threatened the existence of life on Earth throughout the development of human civilization: from the suffering of animals on industrial farms, through tons of plastics polluting the oceans, to greenhouse gas emissions leading to climate catastrophe.

The fact that the viewer has no doubt as to who actually takes part in the proceedings amplifies the grotesque character of these scenes. People – who, every day, kill animals all over the world – are hiding behind the images of mammals, birds, and reptiles. The cheap, latex masks used in the film express the objectifying, colonial attitude of humans towards all other species inhabiting the planet. The film depicts the profound tragedy of animals – not only are their needs disrespected, but also – especially in the case of farm animals – their suffering is not understood or treated with empathy.

Wojciech Dada (b. 1964) is an artist and graduate of the Faculty of Painting, Graphic Design and Sculpture at the Academy of Fine Arts in Poznań, Poland (1995). He has since taught at the University of Arts in Poznań. In 2002 Dada joined the Wunderteam artistic group, together with Rafał Jakubowicz, and, since 2005, Maciej Kurak, previously also with Paweł Kaszczyński and Włodek Filipek (d. 2005). Dada has presented his works at solo and group exhibitions, including shows at Galeria Działań _in Warsaw, National Museum in Krakow, Wyspa Gallery in Gdańsk, Kubus Gallery in Hannover, Center of Polish Sculpture in Orońsko, ON Gallery in Poznań, Zona Sztuki Aktualnej in Łódź, Entrepôt (port du canal) a Venarey-Les-Laumes, France, Anarchistyczny Klub/Księgarnia Zemsta in Poznań, and CSW Znaki Czasu in Toruń.

Katarzyna Górna (b. 1968)  is an artist and graduate of the “Kowalnia” studio at the Academy of Fine Arts in Warsaw. Her work is representative of the genre known as ‘critical art’. Over the course of the last decade, Górna’s works have become socially engaged manifestos concerning, among others, the exploitation of workers, climate change, and multinationals. Since 2009, Górna has also been involved in the struggle for the rights of artists and cultural workers. She is the co-founder of the Citizen’s Forum for Contemporary Arts. In 2019, she received a doctorate in art from the Academy of Art in Szczecin.

Rafał Jakubowicz (b. 1974) is an artist and graduate of the Academy of Fine Arts (Faculty of Art Education and the Faculty of Painting, Graphics and Sculpture) and the University of Adam Mickiewicz in Poznań _(Faculty of Modern Languages, majoring in Hebrew Studies). He is a member of the Workers’ Initiative Trade Union (Inicjatywa Pracownicza). In his projects and teaching practice, he addresses the problems of the precariat, the trade union movement, exploitation, and the practices of resistance in special economic zones. He is also interested in the social costs of transformation in Poland and Eastern Europe, unemployment and class discrimination, anti-social housing policies, poverty ghettos and penal management of poverty, as well as the appropriation of memory in the context of historical policy. In 2015, he created an illuminated relief portraying Jolanta Brzeska, the Warsaw tenant rights activist, entitled “Musicie coś _zrobić” [“You have to do something”] for the WARSAW UNDER CONSTRUCTION festival.