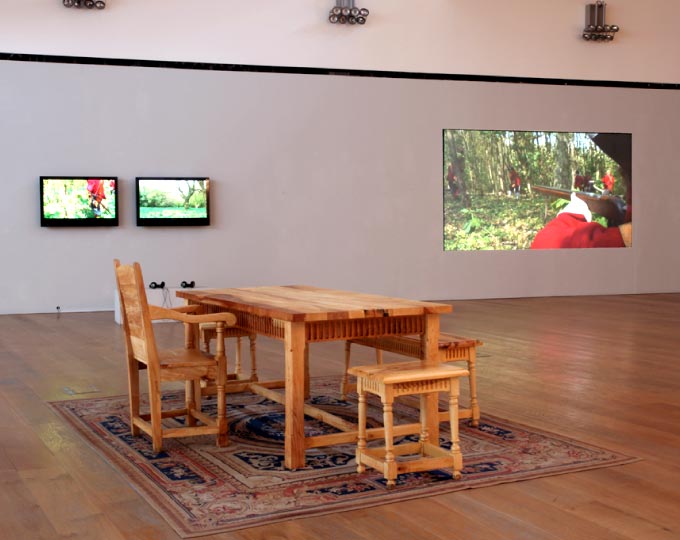 Crawford Art Gallery is pleased to present a solo exhibition by Eamon O´Kane entitled "Twentieth of April Sixteen Eighty Nine" featuring the artist´s skill and understanding of a wide range of media including video re-enactments, painting, performative drawings, and sculpture.

Eamon O´Kane´s intriguing installation focuses on a pivotal period in the history of Ireland. The multi-layering of histories is key to O´Kane´s work and espouses the idea of history being a highly contingent construct and thereby critiquing ‘the artifice of representation´. The complexities inherent in the construction of history are teased out to form a subtle interrogation of the belief systems and political mind-sets subsequently formed in contemporary Ireland.

"Twentieth of April Sixteen Eighty Nine" centres around the history of O´Kane´s parents´ house in Co. Donegal, and attempts to address and illustrate the overlapping histories of his family home and the siege of Derry by James II in 1689. Crucial to the history-making is the symbol of a sycamore tree which James II lunched under on ‘Twentieth of April Sixteen Eighty Nine´ which subsequently fell in 1999 during a storm and the residues of history, myth and O´Kane´s own art histories from which is created.

Eamon O´Kane has exhibited widely including solo shows at ArtSway, New Forest, Economist Plaza, London, and Gregory Lind Gallery, San Francisco and Rare Gallery, New York. In 2006 he was short-listed for the AIB Prize and received a Pollock Krasner foundation grant. He was short-listed for the Jerwood Drawing Prize in London in 2007. O´Kane lives and works in Odense, Denmark and Co. Donegal, Ireland.