THE WORK OF MICHEAL FARRELL 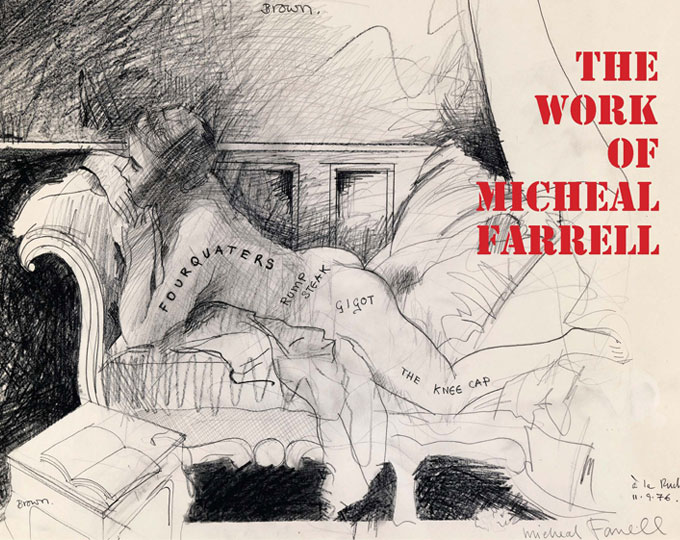 Crawford Art Gallery is delighted to present The Work of Micheal Farrell- an exhibition of spanning the career of one of Ireland's accomplished artists.

Produced by Solstice Arts Centre, the exhibition aims to not only celebrate the work of Micheal Farrell but to encourage a re-evaluation of the artist’s contribution to Irish life as an artist, and as a cultural commentator. Farrell's diverse and engaging work spans over 40 years evolving from an objective, cool abstract formalism, exemplified in the Celtic and Pressé works, to a more subjective figurative expression evidenced in the Pressé Politique and Miss O'Murphy/Madonna Irlanda. The later works being predominantly concerned with issues surrounding Irish identity, politics, culture and history.

A graduate of St Martin´s School of Art, London, Farrell emerges as one of the most interesting of the group of Irish artists who engaged with Modernist art in the 1960s. Visits to Donegal, London, Paris and New York in the mid-1960s resulted in a body of innovative Celtic series. Working mainly in the new medium of acrylic, Micheal Farrell's intention was to recapture the formal vibrancy of Irish illuminated manuscripts combining geometric and organic elements with the Celtic. His renderings were in tune with the hard-edged abstraction then current internationally.

Disturbed by events in Northern Ireland, Farrell making his acceptance speech for the main award at the 1969 Irish Exhibition of Living Art, at the Crawford Art Gallery, Farrell condemned the situation in Derry and British policy in Northern Ireland, announcing that he would no longer exhibit in the North, "until that State has achieved the basic fundamental of a decent society".  He saw the 1974 Dublin and Monaghan bombings in marking his pivotal shift from objectivity to subjectivity, but it was more a shift in intensity in the imagery he was creating. Rather than appealing vaguely to a utopian ideal of remote Celtic ancestry, as he done previously, Farrell addressed the bloody, intractable nature of contemporary Ireland beginning an acerbic examination of what Ireland had become.  In Farrell's reworking of A Female Nude Reclining on a Chaise-Longue (c.1752) by François Boucher (1703-1770) otherwise known as Miss Marie-Louise O'Murphy, the Irish mistress of Louis XV, she becomes Madonna Irelanda, the personification of Ireland, one scandalously at odds with conventional, pious stereotypes. While he is clearly equating Ireland with the courtesan, he's also implying that his subject is being exploited and abused.

His self-portraits echo his critical analysis of Ireland, suggesting a crisis of masculinity, something that becomes a significant preoccupation that treads a fine line between self-pity and ruthless self-examination. Although he emigrated to France in 1971 with his family, partly as a result of the negative reception when he declared his political position at the ROSC exhibition, Farrell continued to exhibit regularly in Ireland, and in the years following he evolved a personal style in which figurative elements again reappear, often relating to his own particular status and condition, linked with that of his native country.

The Work of Micheal Farrellis produced by Solstice Arts Centre with support of the Arts Council/An Chomhairle Ealíon in realising this touring exhibition.

Publication
Accompanying the exhibition, is a full-colour publication will be published with essays by Aidan Dunne, Gerry Walker and Pat & John Taylor.  Price: €15