The Politics of Memory Shane Cullen 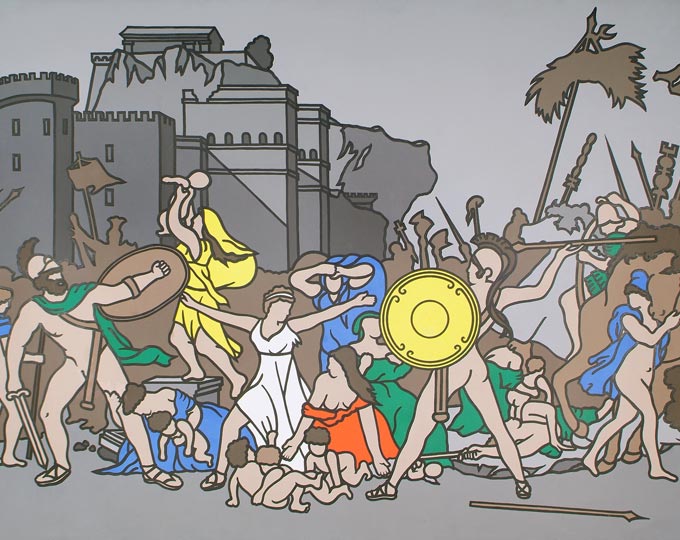 “Commemoration, of course, is a selective act. We choose what to commemorate and how to commemorate it. We decide that some events are worth remembering, honour them with exhibitions and pageants, films and novels. Others are quietly forgotten.”

“A Decade of Commemorations Commemorating Our Shared History”
Speech by An Taoiseach, Mr. Brian Cowen T.D. to the Institute for British Irish Studies UCD, 20th May 2010.

Earlier this year Shane Cullen was invited to curate an exhibition in the Gibson Galleries. This initiative of inviting artist/curators to offer an alternative discourse and evaluation of the Crawford’s Collection, is the first of a series of annual curated projects aimed at giving greater access and interpretation to over 2,200 works of art, ranging from the seventeenth century to the contemporary held in the Gallery’s collection. .

My idea and intention for this exhibition was to position two works at it’s core and to have all of the subsequent works radiate outwards in a discursive and speculative manner.
The two works I identified for this purpose were the bust of James Connolly and the collection of skeletal forms by John Hogan which are both sculptural works and which, in a sense, physically occupy territory as opposed to the more metaphorical propositions and speculations proposed by much of the painting and two dimensional works selected.
Both the artists, Seamus Murphy and John Hogan were from Cork and it is the dialogue between the heroic formal representation of Connolly and the sinewy memento mori of
Hogans exquisitely crafted bones that provide the conceptual bedrock on which the myriad of painted images rest.

Clearly rhetorical political works such as “Les Sabines” by Robert Ballagh, “The Revolutionary” by William Orpen, Nigel Rolfe’s “Roses in the Face”, “Woman in Red” by S.J.Lynham and Willie Doherty’s “Evergreen Memories” are counterposed with expressions of studied lessness such as “Matchboxes” by Charles Brady and “Wind” by Donald Teskey and the beautiful enigmatic self portrait of Samuel Forde. Didactic and documentary forms of pictorial representation are unearthed in the works of Muriel Brandt, Dan O Neill and Patrick Pye.

I am struck by the poignancy of images such as the unattributed photographic print “Silver Bells” from the Nottaway Plantation collection, and the desolate lyricism of “The Last Rehearsal” by Colin Harrison which evokes for me the spirit of Alain Resnais’ “Last Year at Marienbad”. Both of the paintings by Patrick Hennessey represent a similar kind
of considered, dispassionate and analytical rationalism in the approach that the painter has adopted, however, there is a fanatical attention to the detail of the pictorial space
rendered.

“John Joe’s Dream” by D. Spillane, “The Cabinet of Exotica” by Susanna Chan and J.Halpin’s “After Patinir” assail the viewer with a celebratory kaleidoscope of the playful,
the idiosyncratic and the fantastic. Devices and inventions abound in this realm of personal and private languages. Gerard Dillon’s “Stunts” and S. Cooke Collis’ “Still Life
with Mandarin” are further fine examples of this genre the climactic intensity of colour in Elisabeth Magill’s “Blue Constrictor” dramatically demonstrating the power of the
imagination and of painting’s power to successfully transcend its own materiality..

I have included two paintings which it might be assumed were made from observation. “Belgium under Snow” by A. St John Partridge and “The Bedouins” by H.Bishop. The
muted colour range and the restrained, and understated style of these paintings belie the high level of mastery in their execution. There is something about the assuredness and
certainty of these pictures which casts them adrift and leaves them stranded, as the epoch which Connolly and his fellow ideologues and revolutionaries prophesied comes to pass
with all of its attendant catastrophes. Beyond the intimations of mortality inspired by the skeletal forms of John Hogan’s bones, wrought for the purposes of physiological study
and demonstration, the art of James Connolly and his heirs, to conceive of, to advocate and to finally bring about a future which we have still failed to grasp, can be dimly
perceived through the heavy shrouding of the atrophied political institutions that rule our daily lives. Are the great exponents of internationalist conceptualism Christo and
Jean Claude providing us with a meditation on this concept or are they proposing that we might tread a path of renewal?
Spanning the centuries, it is this sense of immanence and expectation that is invoked by so many of the works in this great collection. At one moment we find it in the haunted
gaze of Samuel Forde, pale and youthful witness to the fall of angels, and at another in the righteous defiance carved onto the face of doomed revolutionary James Connolly.

Inevitably through the experience of observing and contemplating the assembled works, both the multiciplicity of meanings, differences and relationships, that we are reminded of our common humanity. It is great art that positions us there, standing on the threshold, at the moment of history

Artists Acknowledgements.
I would like to thank Director Peter Murray for his invitation to undertake the task of making a selection of works from the permanent collection of the Crawford Gallery. A particular thanks to Exhibitions Curator, Dawn Williams for taking the project in hand and bringing it to a successful conclusion. I would also like to thank Colleen O’Sullivan,former keeper of the Permanent Collection for her kind and patient assistance during the period while I conducted my research and answered all of my endless questions.

There is so much work that goes on behind the scenes when mounting an exhibition like this so I would also like to sincerely thank the technical team who entered into the spirit of this endeavour and made “The Politics of Memory”
possible.