THE DOMESTIC GODLESS the food, the bad & the ugly 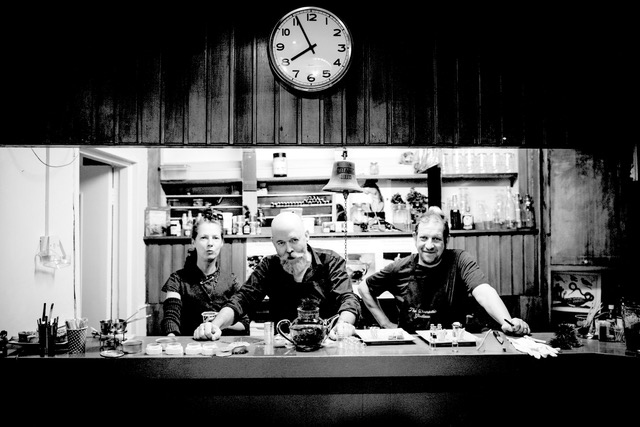 The Domestic Godless present a buffet of local and far flung delicacies from their fifteen-year repertoire. "Prawn-head smoothies", "20,000 Leagues Under Cork Harbour Flapjack", if it were not so real, you would think it was fictional.

This will be a selection of food for the adventurous diner. Unfortunately specific dietary requirements cannot be catered for.

Brunch/Closing Performance with The Domestic Godless
Saturday 25 November, 11:00am - 2:00pm

For fifteen years The Domestic Godless have been working on the very fringes of Ireland’s blossoming gastronomic renaissance employing food (its taste its presentation its production and cultural values) as artistic material for irreverent experimentation.

They have trodden a fine line between cuisine and art, researching the stranger corners of global food culture, creating installations, banquets and performances in such places as the Irish Museum of Modern Art, the majestic Castletown House in Kildare, an abandoned hotel in the heart of Athens and a mini-skip at the gates of City Hall in Belfast.

The Domestic Godless have been working together in a time that has seen food culture change dramatically in Ireland. Originally inspired by the Dada art movement of the early twentieth century, Domestic Godless create unpredictable and unorthodox food combinations, their recipes subvert prevalent visual and tasting norms promoting confusion and delight of the idiom ‘you eat with your eyes’ - exploring the relationship between contemporary art and food and its cultural currency.

The Cork-based group's three week residency in the expansive Upper Gallery of the Crawford Art Gallery will explore contemporary visual art and food from a unique and tangible entry point. Domestic Godless will explore food as both a concept and a medium through which to convey humour, empathy and to comment on wider cultural and social issues, creating dadaesque concoctions of inventive, high quality dishes within the setting of multi-media visual displays, anarchic sculptural installations and memorable experiential food tasting by the visiting public.

A recipe book will be produced, part funded by a Fund It campaign, to celebrate Domestic Godless's practice and wider cultural impact documenting the collaborations and performances including recipe column featured in VAI Newsletter from 2004.

The Domestic Godless were founded by artists Stephen Brandes and Mick O’Shea, (later to be joined by Irene Murphy) under the Cork Artist’s Collective banner at the exhibition Artists/Groups at The Project Arts Centre, Dublin in 2003. They have introduced to the world such delights as Sea Urchin Pot Noodle, Foot & Mouth Terrine, Carpaccio of Giant African Land Snail and Victorian high tea wrought from all manner of fertilizer, often in the setting of anarchic installations.

Hotel Bageion, Omonoeia Square, Athens, Greece, May 2017; ‘A Gastronomic Evening of Invasive Pests’ atthe Science Gallery, Dublin, April 2016; ’20,000 Leagues Under Cork Harbour’, Sirius Arts Centre, Cobh, September 2015, ‘A Reinvention of the Irish Breakfast’ at the National Design Gallery, Kilkenny, May 2015 and a cookery school at the Cook’s Academy in Dublin during the Bram Stoker Festival in 2014. Between 2014 and 2015 they toured “Canaliculus Pergamentorum”, to Kinsale Arts Festival, Tulca Art Festival, Galway and Broadstone Studios, Dublin, which saw the Domestic Godless create a 30 metre canal of sewageducting, on which travelled an array of dishes inspired by the bitter-sweet reminiscences of miserable Summer holidays.