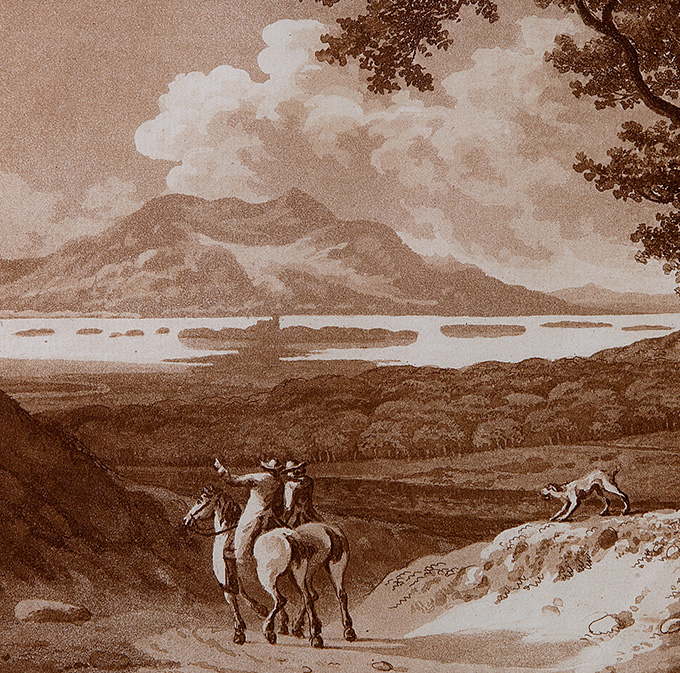 Killarney has long captured the imagination of visitors and residents alike, from early Christian settlements in the seventh century to the emergence of tourism 250 years ago.

In 1770, Jonathan Fisher (1740-1809) was the first artist to produce a series of views of this County Kerry landscape when he painted six picturesque scenes of Killarney and its environs. These were subsequently reproduced as engravings which helped to develop the town, lakes, and mountains as a tourist destination, a project begun by Thomas Browne (1726-1795), 4th Viscount Kenmare.

Nearly two decades later, Fisher returned to compile a more ambitious portfolio of aquatint engravings entitled A Picturesque Tour of Killarney, describing in twenty views the most pleasing scenes of that celebrated Lake, etc. etc., (1789). These views, dedicated to the artist’s friend and patron John Dawson (1744-1798), 1st Earl of Portarlington, are presented in this exhibition.

Jonathan Fisher is thought to have begun his working life as a woollen-draper in The Liberties area of Dublin, before taking up his artistic career in the 1760s. He consistently exhibited his paintings and engravings, which were primarily devoted to Irish landscapes. He lived at Ship Street, Dublin with his wife Martha Price, the daughter of a Cork merchant, and supplemented their incomewith the post of Supervisor of Stamps at the Stamp Office on Eustace Street, from 1778 until his death in 1809.