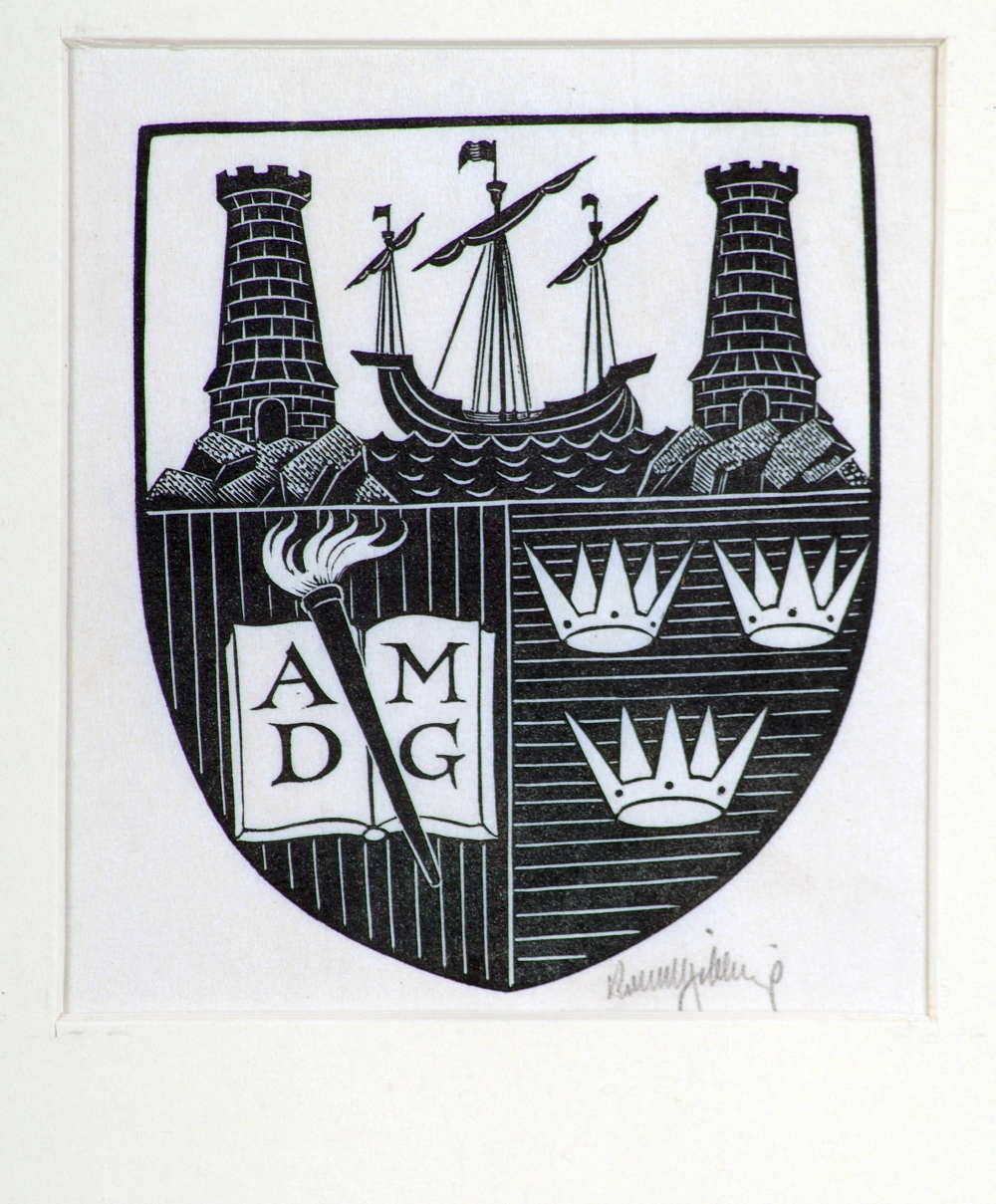 This work is by Robert Gibbings and it is called Coat of Arms. It is a wood engraving, which means that the artist carved into a block of wood, rolled a layer of black ink onto the wood and printed his design onto paper.

A coat of arms is like a family crest and a lot of historical families across Europe would have one. They allowed families and businesses to be instantly recognisable and were like a stamp of ownership on armies, castles and goods. Now they are commonly used on buildings, official documents and products. They include symbols, animals, colours and Latin references. They tell the history and ideals of the owner with just a few pictures and words.

Robert Gibbing’s coat of arms is for University College Cork. Can you work out the symbols in the crest? Does the top part with the two castles and boat look familiar? This is the symbol for Cork City. The Latin motto for Cork City is Statio Bene Fide Carinis which means ‘a safe harbour for ships’.

Fact: Did you know Cork has one of the biggest natural harbours in the world?

A coat of arms is not very useful if people cannot understand the symbols on the crest. Symbols are very useful little pictures because people from all over the world can understand them, even if they don’t speak the same language.

Symbolism is the oldest form of written communication. Hundreds of thousands of years ago the very first humans wrote on their cave walls using drawings of animals and hunting. Thousands of years later the Ancient Egyptians used hieroglyphics (small symbols) to write on walls and pyramids.

Can you find the symbols in the hieroglyphs below to write out your name? If there are any characters or symbols missing you can add your own!

Ogham is an alphabet used between 4 - 6 AD (1700 years ago) to write the early Irish language. The characters were carved into stones. We think that each character or letter relates to its own native Irish tree.

Here is the ogham alphabet:

Can you figure out what tree each of these ogham stones relates to? The character is taken from the Irish word for the tree. For example ‘r’ is from ‘ruis’ which means ‘elder’ in Irish.

The Irish names are under the letter you need to figure out, so if you are good with your Gaeilge then you will have an advantage!

Tip: the stones are read from the bottom to the top.

We use symbols all the time in our modern lives too. One of the most popular ways we do this is through emojis. What are your favourite emojis?

Can you guess these Disney films from their emoji symbols?

Making a coat of arms

Now that we know a lot more about symbols, we can create our own coat of arms. In your coat of arms you can include your favourite colours, emojis and maybe even your name in ogham?

You can use a traditional crest shape like this:

If you want to include a few different parts of your history, you can divide it into different sections. If you speak any other languages, you can include them here too. This is your very own crest so you are the captain!

Talking Pictures: Coat of Arms was devised by Annie Forrester