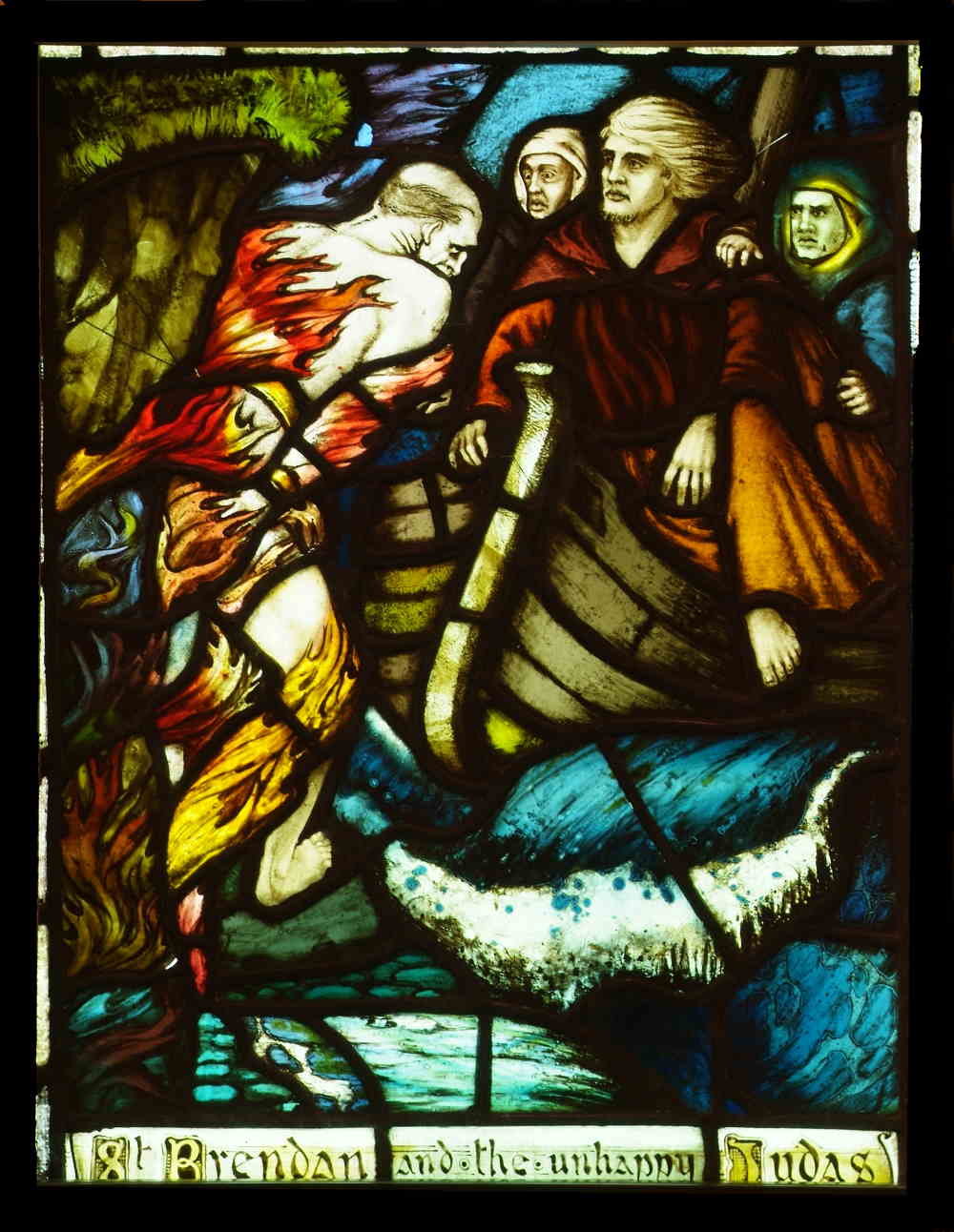 This is a beautiful stained-glass panel which was created in 1911 by the Irish artist Harry Clarke. Here we see St. Brendan on a boat with his men meeting the unhappy Judas. Judas is clinging to a rock and being punished with fire for betraying Jesus. Brendan looks like he is about to get out of the boat to talk to Judas and his men look terrified.

What is Stained Glass?

Stained Glass is coloured glass that is used to form a decorative pattern or picture, with a lead (metal) frame, most often seen in church windows. The creator of this stained glass, Harry Clarke is probably the best known Irish stained-glass artist and his work can be seen all over Ireland in different churches and galleries. In Cork, you can see his pieces in the Honan Chapel in UCC or in the Crawford Gallery. Harry Clarke used bright colours in his work and loved deep blues, as you can see in this stained glass. One of Harry Clarke’s favourite saints to capture in glass was St. Brendan, let’s learn more about him.

St. Brendan the Navigator was born in County Kerry in the year 484. He set up lots of monasteries around Ireland but he also loved to travel on the sea. He had many adventures with his team of men in a coracle (small boat) including a seven-year voyage where he visited Iceland, Greenland and maybe even America long before Christopher Columbus discovered it. Brendan is the Patron Saint of Sailors and Travellers.

By now I’m sure you love singing, so let’s sing this fun song about St. Brendan by Christy Moore. Here is the first verse and chorus and you can find more verses and a recording of the song online.

A boat sailed out of Brandon in the year of 501
’twas a damp and dirty mornin’ Brendan’s voyage it began.
Tired of thinnin’ turnips and cuttin’ curley kale
When he got back from the creamery he hoisted up the sail.
He ploughed a lonely furrow to the north, south, east and west
Of all the navigators, St. Brendan was the best.
When he ran out of holy water he was forced to make a stop,
He tied up in Long Island and put America on the map.
Did you know that Honolulu was found by a Kerryman,
Who went on to find Australia then China and Japan.
When he was touchin’ 70, he began to miss the craic,
Turnin’ to his albatross says he “I’m headin’ back”.

“Is it right or left for Gibraltar”
“What tack do I take for Mizen Head?”
“I’d love to settle down by Ventry Harbour”,
St. Brendan to his albatross he said.

Can you tell the story of St. Brendan? Here is a map with some of the things that we think happened to St. Brendan on his voyage to America... (Except Donald Trump of course – that part is a joke!)

You can start the story in Kerry with Brendan and his men building a boat and loading it up with supplies. What did they bring with them?

Then you can follow numbers 1-6 to tell the rest of the story. What do you think happened when St. Brendan came across these strange things? Do you think he was afraid? How do you think he managed to overcome these obstacles and continue on his journey?

Maybe you could draw out some of the stories like a comic strip!

Let’s make our own stained glass style artwork. You can use old sweet wrappers as ‘glass’. I find Quality Street wrappers work best.