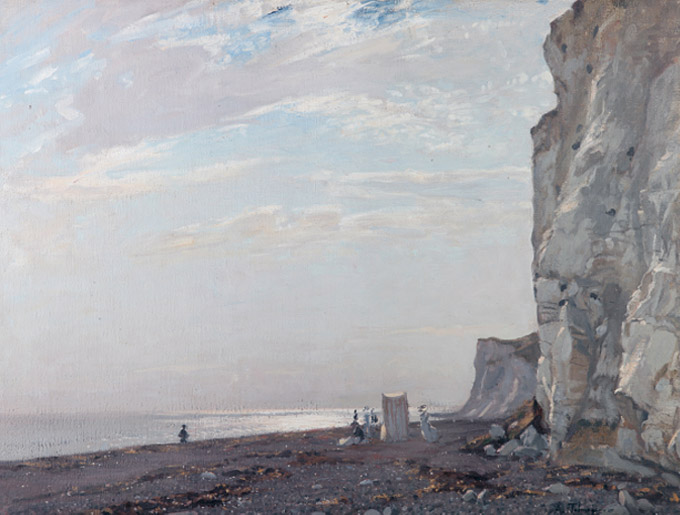 Although the artists represented in this exhibition--most of whom lived and worked in England during the first half of the twentieth century--were not part of any formal group, they share a clear preference for traditional methods and modes of representation. Rather than following a Modernist approach of innovation and experimentation, they instead explored landscape and interiors from an academic perspective. To an extent these artists were insular, exhibiting mainly at the Royal Academy, the Fine Art Society and at other leading galleries in London, but they also reveal the considerable influence of Continental European art in Britain. Included in the exhibition is a notable precurser, Frank Bramley, whose beautifully-painted Domino!is representative of the Newlyn School that flourished in late nineteenth century Cornwall.
All the paintings in this exhibition are from the permanent collection of the Crawford Art Gallery. For the most part they were acquired during the 1920's and 30's by the Gallery's Gibson Fund Committee. Chaired by Dermod O'Brien, President of the Royal Hibernian Academy, this committee had a preference for academic, non-controversial art. However, while not at the forefront of avant-garde movements, the artists they chose are united by their sensitivity to light and colour, and by a desire to represent subtle nuances of landscape and interiors. Their paintings evoke sun-dappled landscapes, sea and cloud, and winter snow. The influence of French Realism and Impressionism is particularly evident in the work of Alfred Munnings, Arnesby Brown, Algernon Talmage and Anne St. John Partridge, while a dash of Symbolism comes through in the strange and satriric painting The Throne of the Gods and This Strange World by William Otway McCannell. The Vegetarian Feast by H. Davis Richter is painterly and tends towards Expressionism, as does Frank Brangwyn's The Vineyard.

The landscapes in the exhibition include scenes in Cambridgeshire, Kent, Hampshire, Cornwall and the Hebrides, as well as further afield, such as The Abbadia, Orvieto, by Bertram Nicholls, Dieppe Market, by Alexander Jamieson, and the evocatively-titled Morning Haze, Concarneau by Terrick Williams. Henry Bishop's The Bedouinscaptures well the colours of the North African desert. Philip Wilson Steer, who painted Study for Nidderdale, lived in Walberswick, a village in Suffolk that is still today a haven for artists, but the Impressionist painting of Walberswick in this collection is by his contemporary, Ronald Ossory Dunlop. Like Norman Garstin, represented here by a view of historic Antwerp, Sunshine in the Beguinage, Dunlop was born in Ireland but spent most of his life working in England. Among the highlights in the collection are September Morning, the Fields and The Quiet Room by George Clausen, and A Country Lane by Walter Westley Russell, works that are timeless and yet evoke the atmosphere of England in the early 1930's.

Overall the paintings speak of a short period in England--barely two decades--between engagement in two horrific and bloody world wars, a period of peace that people knew was not going to last. The artists in this exhibition perhaps sensed this, and in their efforts to record fleeting impressions of landscape, idyllic pastoral scenes and quiet interiors, they seem to have turned away from the city, from progress and from the Modern world. This collection of paintings, unique amongst Ireland's art museums, conveys an atmosphere of contemplation, peace and tranquility, making it something to treasure and enjoy.