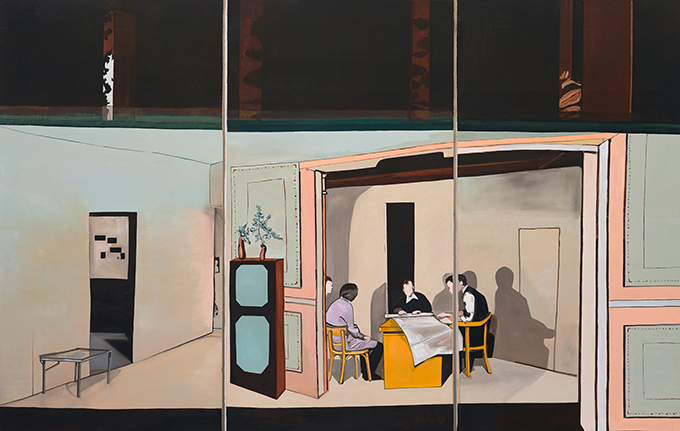 Sonia Shiel's exhibition, Rectangle, squared. features large-scale paintings, punctuated by smaller scale sculptures and an accompanying text written by the artist. Shiel’s immersive works invite you to explore the illusory world in which a fictional artist finds herself. For example, in one ‘scene’, the artist is presented with a rectangle in which she is mistaken for a tree. In another, the bubble she has lived in literally bursts open, and she sees the world as if for the first time.

Shiel's far-fetched work contemplates the mundane drama of living and various traditions of story-telling. Bold, yet enigmatic, her works conjure theatrical connotations both through their life-size scale, and in their staged scenarios. Shiel's monologue provides additional context to the works' materiality, both real and imagined, and ultimately explores what it means to be creative. Rectangle, squared.exaggerates a sense of the quizzical and mischievousness that we encounter in our everyday lives while trying to make sense of our surroundings.

Sonia Shiel has exhibited extensively in Ireland and internationally.  Recent projects include Rewildering, NCAD Gallery, Dublin (2017); Henrietta hyvä, HIAP Helsinki FIN (2016), ISCP, New York; (2014) Unseen Presence; Project Space, Irish Museum of Modern Art (2014), Misadventure Seeks Rainy Afternoon, Oonagh Young Gallery (2013). In 2014 she completed the Art & Law Fellowship Program at Fordham Law School, the International Studio & Curatorial Program and residency at IMMA (2014/15). Much of the work for this exhibition has been developed during her residency at University College Dublin, in the School of Arts and Humanities, with the support of the Arts Council Visual Artists Bursary and Dún Laoghaire-Rathdown County Council.