The School of Looking: INVISIBLE LIGHT | The Animal Colour Debate 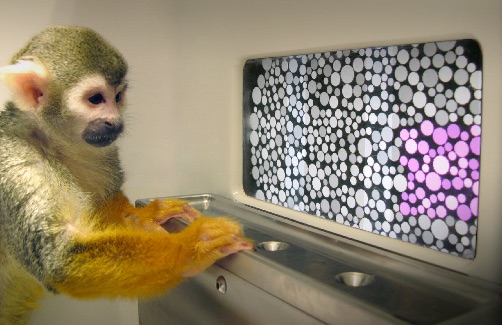 Most mammals are dichromats, seeing two colours – blue and yellow – a simpler colour space than our own trichromatic vision, with its rich landscape of primary and secondary hues. But exactly what colours any animal can see will always be unknown unless we can find some way to ask them directly…

The School of Looking was introduced to a rich body of scientific research into animal vision by Dr Christoph Witzel (University of Southampton), who suggested some simple ways of interacting with animals through colour. The result was a series of simple, light-hearted experiments with many different animals involving illusions, coloured objects and coloured lights.

The famous ‘snake illusion’ was designed by Akiyoshi Kitaoka, a professor at Ritsumeikan University, Kyoto. Created with his kind permission, the floor of The Animal Colour Debate is a variation of Kitaoka’s illusion. Recently several researchers have observed – with surprise! – that cats respond strongly to the illusion, which prompted the artists to present it to some other animals and to capture their reactions on video.